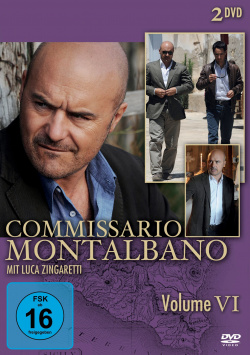 Content: Commissario Salvo Montalbano (Luca Zingaretti) is back and provides law and order in two new films in the fictitious Sicilian coastal town of Vigàta. One would think that the sun, the sea, the good food and the beautiful women ensure that Montalbano leads a relaxed, serene life. But after he had to deal with trigger-happy seniors, a kidnapping and some cryptic puzzles in his first new case, he is confronted in the second case not only with a faceless corpse, but also with private nightmares. For Montalbano seems to slide directly into a deep midlife crisis that makes him dream of his own death - and even in death he still clashes with his rough coroner Pasquano. Not a very good time for the Commissario...

Before the offshoot series "The young Montalbano" is launched, the older version of the popular novel character from Andrea Camilleri's pen may convince the fans of his very special investigation methods. However, the fact that this time there are only two movies and not four as in the previous sets is a pity on the one hand. On the other hand, the two episodes from 2011, with their mixture of suspense, humour and drama, offer such good entertainment that fans of the stubborn man of pleasure are happy to settle for just two films. Despite the murderous stories, the beautiful shots of the locations in Sicily invite you to dream of a holiday by the sea. And just the amusing nightmares that plague Montalbano at the beginning of "The Days of Doubt" make this sixth box a must for all fans.

The structure of the falls has changed little. A breath of fresh air blows through "The Hunt for the Treasure", as Montalbano has to deal with a stranger who wants to compete with the ingenious investigator with the help of cryptic puzzles. Who is hiding behind this unknown, should be clear to crime thriller professionals after some time. Nevertheless, this episode has a very special tension and also very nice scenes, which makes the almost 100 minutes running time fly by. The fact that "The Days of Doubt" is a very personal episode for the Commissario alongside the actual case also adds a pleasant touch of variety.

And that's what the individual episodes are about:

DVD 1: The hunt for the treasure

First Commissario Montalbano must have two aged, trigger-happy siblings arrested, then he detects a beloved hobo in the murder case. Without knowing it, he gets into a strange treasure hunt with deadly puzzles. Behind it hides an unusual kidnapping case and a supposed volunteer increasingly turns out to be a villain. (Text: Servus TV)

DVD 2: The Days of Doubt

Commissario Mopntalbano experiences a midlife crisis and dreams of his funeral. Her life, however, does not look any better for the Italian Commissioner. Then a faceless corpse is found on a small floating boat. The report says the opera was poisoned before the face was demolished. The only ray of hope in the investigation is Montalbano's meeting with Lieutenant Laura Belladonna. (Text: Servus TV)

Picture + sound: The technical implementation of the series has not changed with the sixth DVD box. The tone, which is only available in German, is presented in a harmonious 2.0 stereo mix, whereby the centrally and very powerfully mixed dialogues set the tone. The picture pleases with its captivating and atmospheric colouring and its tidy sharpness, through which even smaller details are clearly recognizable especially in the bright moments. There are only small weaknesses in the darker scenes, where slight blurring and minimal image noise are noticeable.

Extras: Bonus material does not have to offer this box either.

Fazit: "Commissario Montalbano" Vol. 6 has only two new cases of the popular Italian commissioner to offer. But they are again so worth seeing that one as a fan gladly accepts this lower dose. The two new films not only present themselves in terms of content, but also technically in the usual good quality. And although the sixth DVD box again has no bonus material to offer, there is a total for this set again: absolutely recommended!