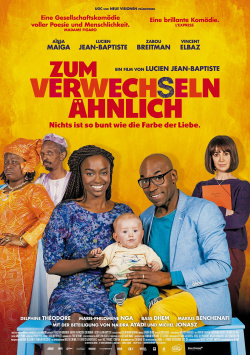 Paul (Lucien Jean-Baptiste) and Sali (Aïssa Maïga) are a happy couple. They are infinitely in love with each other and have fulfilled a dream with the opening of a small flower shop in Paris. But one thing is still missing for their great happiness: A child. But since they cannot have children, they applied for adoption years ago. And this one is finally successful. Paul and Sali are allowed to adopt little Benjamin. The boy is very sweet and easy-care - and white! This is not a problem for Paul and Sali, but it is a problem for Sali's parents, who are deeply rooted in their Senegalese traditions. And Madame Mallet (Zabou Breitman) of the Office for Family Reunification also sees it as problematic that a white child grows up with black parents. She never misses an opportunity to look the two of them in the eye, to catch them in a drastic educational error. But Paul and Sali don't want to let their newly found family happiness be destroyed that easily…

With "Zum Verwechseln ähnlich" director and leading actor Lucien Jean-Baptiste humorously turns to some actually not so funny topics like racism, prejudices and arbitrary authorities. The pleasant thing about his approach is that he is able to gain a few new facets from all these topics. Of course there are the usual prejudices that Paul and Sali face because of their skin colour. So Sali on the playground is automatically held to be the nanny of Benjamin. But nobody wants to believe her that she's his mother. On the other hand, there are her parents who break with Sali when she brings a white child home. They encounter the mixed race family with just as many prejudices and dislikes, which does not make the situation any easier for the couple.

It is to Jean-Baptiste's credit that he tries to pick up on all facets of prejudice in our society. Unfortunately, however, he does not have such a sensitive hand in all areas of his production. Thus, some gags are frighteningly flat and in some scenes the whole thing becomes much too hysterical and silly. If, for example, Sali's single girlfriend agrees to wrap Benjamin and is so overly stupid and then - the gag moth box says hello - the baby pisses on her, then it's not funny, it's just embarrassing. The same applies to the finale, where loud gags and hectic corny jokes are given away for any potential for fun and emotion.

Luckily there are also lots of scenes that are funny, touching and simply beautifully staged. Thus, the successful aspects and the weaknesses largely balance each other out. In the end, the overall impression remains quite satisfying, even though it is clearly noticeable that much more could have been achieved from the nice initial idea. Despite some disappointments there is one very clear thing here: Worth seeing!