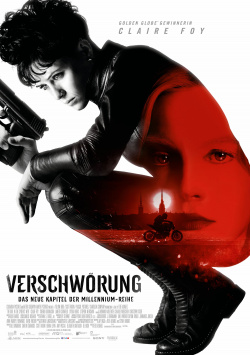 The infamous hacker Lisbeth Salander (Claire Foy) has disappeared. But like a phantom she occasionally emerges from the darkness to help women who are beaten, tortured and humiliated by men. That's the way it should stay, but then a desperate scientist (Stephen Merchant) asks to steal a program he developed from the Americans. Lisbeth actually manages to steal the program from the US Secret Service server. But what she doesn't suspect is that she involuntarily played into the hands of a powerful secret organization. Her only confidante, journalist Mikael Blomkvist (Sverrir Gudnason) must now help her prevent the dangerous program from falling into the wrong hands. But she didn't count on who her mysterious opponent was…

"Conspiracy" is the film adaptation of the first novel about Lisbeth Salander and Mikael Blomkvist, which was not written by the bestselling author Stieg Larsson, who died in 2004. The journalist and writer David Lagercrantz has taken over the characters and tried to spin their story further. The fans and critics liked this only conditionally, but it sold well enough that Lagercrantz was allowed to publish another book of the series. And even a film version wasn't long in coming. After David Fincher's US remake of "Verblendung" fell short of the studio's expectations, the plans to adapt the two successor volumes with the same team were put on hold.

Instead, the actors were replaced and "Conspiracy", a novel not yet filmed, was adapted. The result is a solid action thriller that doesn't have much in common with the MILLENNIUM story. Lisbeth Salander has been distilled down to a battle Amazon and Mikael Blomkvist no longer plays a role strictly speaking. He really doesn't contribute anything to the plot of the film - he's apparently only there because he simply belongs to Lisbeth Salander. Claire Foy is good as Lisbeth Salander, but unfortunately doesn't have the opportunity to give the character the intensity that Noomi Rapace has so excellently embodied.

All these are reasons why "conspiracy" should be considered as a work in its own right. Because as such the film works well. It is exciting, visually excellently implemented and well played. The whole thing has very little to do with what Stieg Larsson once thought up. Those who manage to detach themselves from it are offered two hours of entertaining suspense cinema. Not more, but also not less. And there is a deserved one for that: Worth seeing!