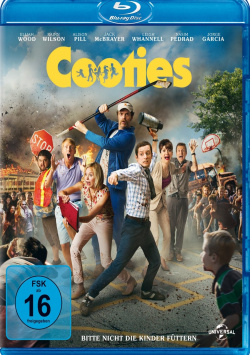 Film: Actually, Clint (Elijah Wood) dreams of becoming a successful writer. But as this has not yet worked out, he has to return to his hometown Fort Chicken to work as a substitute teacher at his old school. In the midst of a collection of dysfunctional colleagues such as sports teacher Wade (Rainn Wilson) or Rebekkah (Nasim Pedrad), who sees a potential rapist in every man, Clint meets his former classmate Lucy (Alison Pill) again, for whom he has raved before. Too bad she's involved with Macho Wade of all people. The strange colleagues and totally disrespectful children seem to be the biggest problems at Clint's first day of school. But far from it, because a virus in the chicken nuggets, which are served for lunch, turns the children into bloodthirsty zombies. And the already overburdened teachers now have no choice but to get together and fight together against the little devils…

With their directorial debut "Cooties" the filmmakers Cary Murnion and Jonathan Milott try to gain some new sides to the sub-genre of zombie comedy. At the same time they pay tribute to numerous representatives of the horror or fantasy genre in a lovably humorous way. They make use of a lot of bizarre ideas, which are sometimes actually very original. The fact that her film can also be understood as a protest against industrial mass animal husbandry is made clear in a rather direct way by the not exactly appetizing opening credits. But as soon as the children have turned into bloodthirsty monsters through the attempted chicken nuggets, this criticism tends to take a back seat and leaves the field to bitterly evil and not always politically correct humour.

What the zombie kids use to play marbles or skipping ropes in the schoolyard is simply so wonderfully macabre that fans of horror comedies will enjoy it so much. And also the allusions to "Terminator" or the "Lord of the Rings" movies should make some viewers smile with amusement. The fact that some of the other gags, on the other hand, don't really want to ignite and one has turned out to be completely unnecessarily dirty is then only of limited negative importance. What works really well, however, is the slightly satirical level of the film, which deals with topics such as the excessive administration of medication to children, fast food in school meals, the weapons laws in the USA or the decision of some states to teach creationism in addition to the theory of evolution. It's this rather subtle humor that makes the flatter gags forgivable.

May be that "Cooties" is not a genre milestone like "Shaun of the Dead". But it's a very entertaining debut work, that shows a certain passion on the part of the makers and that in many moments everything does the right thing. And there is a very clear one: Absolutely worth seeing!

Picture + Sound: The picture of the DVD shows slightly excessive contrasts, but otherwise pleases with a harmonious color scheme and a good overall sharpness. Only in dark scenes and with faster camera movements some small weaknesses can be spotted. The sound is available in a decent Dolby Digital 5.1 mix. Although the dialogues are very centrally mixed, the ambient noises and audible sound effects are still very effective. Altogether there is a good one for it: Good!

Extras: As a bonus the disc has an interview with Elijah Wood to offer (approx. 13:39 min.). Unfortunately, that's it.

Fazit: "Cooties" is a politically incorrect zombie comedy, which is a bit too silly in some scenes, but which can score with wonderful macabre humor and some very original ideas. Not a masterpiece of modern zombie film, but in any case an entertaining genre contribution with good-humoured actors and probably the most macabre children's toys in film history. The DVD is technically well done, the bonus material, on the other hand, is quite meager with a short interview. Nevertheless there is one more than satisfied: Recommended!