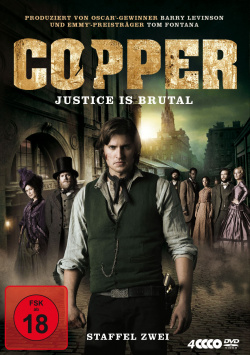 Film: New York in 1865: In the immigrant neighborhood Five Points gang wars, corruption, murder and prostitution are the order of the day. Detective Kevin Corcoran (Tom Weston-Jones) desperately tries with the help of Robert Moorhouse (Kyle Schmid) and the doctor Matthew Freeman (Ato Essandoh) to bring some order into the crime and illness marked quarter. His efforts became even more difficult when the civil war general Brendan Donovan (Donal Louge) took over the management of the 6th district. Donovan maintains close ties with the Tammany Hall party organization of the unscrupulous William Eustace (William Baldwin), who wants to bring Five Points under his control at all costs. And sometimes a dedicated cop like Corcoran just gets in the way. When Matthew receives a tempting offer from his old mentor, the small team threatens to break for good. Horrible murders, personal blows of fate, danger of epidemic or even a brutal occupation of the area by the gangster Philomen Keating ensure that in Five Points simply no peace returns. But then something unimaginable happens that could change the future of the neighbourhood and the whole country forever...

"Copper" returns after a successful first season with ten more episodes. Unfortunately after the dramatic end of the second season it's already over again. Despite good reviews and enthusiastic viewers, BBC America decided against a third season of their first self-produced series because of the poor ratings. It can't be because of the good actors, the very atmospheric set and the suspenseful scripts that the series didn't find its audience. Perhaps the authenticity of the production was simply too dark and brutal for the masses. That's pure speculation, of course. It's a fact that "Copper" has become an absolutely thrilling, relentless, dirty and gloomy historical thriller, which doesn't necessarily offer what's commonly understood as light entertainment. But the action in Five Points is thrilling and gripping.

The second season has some very intense storylines to offer, which are not only very exciting, but also emotionally stirring. These are carried by a very strong ensemble, which also includes a more than convincing Franka Potente as a shady brothel owner. The dramaturgical climax is undoubtedly reached in the last two episodes, in which a historical event shuffles the cards completely new. But also a very personal loss of Corcoran or a terrible plague, which is rampant in Five Points, provide very intense moments.

Although there are some clear parallels to the British series "Ripper Street", "Copper" has its own atmosphere, which is somewhere between "Gangs of New York" and "Deadwood". If you don't need good mood material all the time and you also have to deal with dark, brutal material, you shouldn't miss this very good second season. Absolutely worth seeing!

Picture + sound: The picture of the DVD pleases with its very earthy, atmospheric coloring and the good image sharpness. Even in the numerous dark scenes, real weak points can hardly be spotted in the very clean picture. In many scenes the sound is dominated by the dialogues, but now and then it also has pleasantly dynamic surround moments to offer. Good!

Fazit: "Copper" is dirty, dark and relentless. The US response to "Ripper Street" is excellent and convinces with an authentic equipment. The exciting stories also ensure that the viewer is entertained in the best possible way. It's a pity that after this very good second season, this elaborate production is already over again. But even if the ending is a bit unsatisfactory and the DVD box doesn't have any extras to offer, the purchase of both seasons is definitely worthwhile. Because "Copper" is so complexly told that you can watch the series several times without getting bored. Therefore there is a very clear one: Recommended!