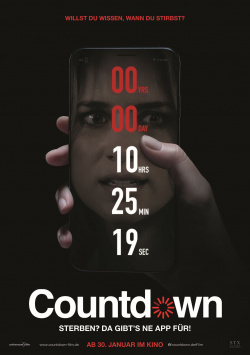 There is actually nothing left for which there is a suitable app, whether weather, directions, dating or sex. But at a party a group of teenagers accidentally discovers a brand new app that predicts the exact time of death. Of course that sounds like a cheap fake. Even when one of the girls from the party, who is predicted to die the same night, dies at that very moment, young nurse Quinn (Elizabeth Lail) doesn't believe that this app is really real. And so she agrees to download it to her smartphone, accepting the terms of use without any consideration. A serious mistake, because not only that in connection with the app mysterious deaths are accumulating. Quinn also gets the message that she herself only has two days left. Little time to get to the bottom of the secret of the app and prevent your own demise…

"Countdown" is a kind of "final destination" of the smartphone generation. The idea is simple and somehow seems familiar. Of course, this may also be due to the fact that the realization does not exactly deal sparingly with all kinds of genre clichés. Most of the characters also remain pale, which doesn't really encourage the viewer to be part of the action. Only a smartphone salesman with hacker qualities, played by comedian Tom Segura, and P.J. Byrne as a somewhat unusual priest stand out from the otherwise stereotyped ensemble. Elizabeth Lail, who convinced in the first season of the Netflix series "You", does not manage to give her very stencil-like drawn figure interesting edges and corners.

Even though there is a lot to criticize about the movie, "Countdown" is quite entertaining on the bottom line. Surely, nothing really new is offered. The outcome of almost every scene is predictable, as is the fact that at the end the door is left ajar for a continuation. Nevertheless, director Justin Dec manages to build up some tension and a decent amount of entertainment. As a genre-fan you may be fed with well-known ingredients, but still leave the cinema pleasantly saturated. If you absolutely have to see the movie on the big screen is another question. If you don't mind being offered only simple entertainment according to the rules, you can definitely buy a ticket. </For all others, however, it is sufficient to wait for the home cinema evaluation. Because for an entertaining television evening this rather tame horror flick offers enough worth seeing. To justify a visit to the cinema, on the other hand, it would have had to be something more. Therefore, in the end it is only enough for one: Still worth seeing with some cutbacks!</p>