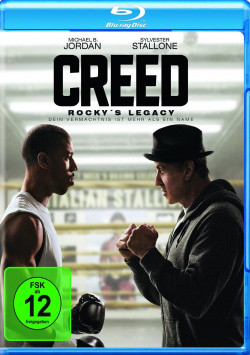 Film: Adonis Johnson (Michael B. Jordan) spent most of his childhood in homes. That's where he learned how to fight his way through. He never met his father, the boxer legend Apollo Creed, because he died in a fight before Adonis was born. But even if he doesn't intend to follow in his father's footsteps, he can't deny that boxing is in his blood. And at some point he just accepts that it seems to be his destiny to get into the ring himself. Without further ado, he quits his job and moves to Philadelphia to be trained by the man who was first an opponent and later his father's best friend: Rocky Balboa (Sylvester Stallone), who has long since hung up his boxing gloves and only wants to spend the rest of his life in his little restaurant. But after initial hesitation, he agrees to train Adonis. And while the young Creed is preparing for his first big fight, Rocky suddenly finds himself confronted with a completely different opponent, whom he is not prepared to fight…

Actually Sylvester Stallone had sent the figure of boxer Rocky Balboa into his well-deserved retirement ten years ago after the last, very successful part of the series. Stallone was absolutely satisfied with the way this iconic character had said goodbye to his fans, that he was convinced that there would be no more Rocky story to tell. But then came Ryan Coogler, who had caused a furore with the drama "Next stop: Fruitvale Station". He really wanted to tell the story of Apollo Creed's son and hit the right note with the first "Rocky" movie in particular. And that was only possible with Stallone's help. It was probably Coogler's passion for the project, the story that included all the classic Rocky themes and last but not least the tenacity of the young filmmaker that finally led Stallone to slip into this role once more - for the first time without having been directly involved in the script.

The result is called "Creed - Rocky`s Legacy" and is a perfect mixture of nostalgia and a new beginning. The film truly doesn't tell a new story, but does so with a lot of warmth, heart and soul and authenticity. In addition, he offers Stallone the opportunity to show all his critics once again that he actually has acting talent - which was immediately rewarded with a Golden Globe and an Oscar nomination. Even though Rocky Balboa is only a minor character here and the movie Michael B. Jordan belongs to him, who delivers a more than convincing performance, this torch handover is only made worth seeing by the very harmonious, sometimes pleasantly humorous interplay between Jordan and Stallone. Between the still unrestrained, hot-headed Adonis and the age-wise Rocky, a stirring father-son dynamic emerges, which lends the film a very special emotional level.

In addition the boxing fights and the training are the focus of the action. Coogler also delivers a harmonious mixture of classical elements and modern filmmaking. There is of course the traditional training montage, which is accompanied by a thrilling soundtrack that captures the spirit of Bill Conti's music very well. Coogler's staging does not follow current trends, but nevertheless does not look old-fashioned. During the fights themselves he manages perfectly to bring the viewer into the middle of the action, so that these scenes get a tremendous intensity.

"Creed - Rocky`s Legacy" is not only a gripping boxer drama, a beautiful love story and a worthy homage to the characters Stallone created over 40 years ago. The film is also a declaration of love to Philadelphia and its inhabitants. This becomes clear in a picture language that differs pleasantly from the smooth ironed pictures one is used to in Hollywood. Here Coogler remains true to the style that created the very special atmosphere at "Next stop: Fruitvale Station". Actors, story, locations, camera work, music and a bow to the beginning of the series - all this results in an impressive and harmonious overall picture. If you liked the first "Rocky"-movies and you appreciate entertainment cinema, which sets a high value on character development and a well written story, you shouldn't miss this work. Absolutely worth seeing!!!

Picture + sound: The Blu-ray image is absolutely clean and presents the action immersed in warm, atmospheric colors. The overall sharpness is on a very good level, whereby even smaller details are usually shown to advantage. The sound in German is unfortunately only available in a Dolby Digital 5.1 mix, but it is pleasantly lively. The voices are well tuned to the soundtrack and the various sound effects - especially during the boxing fights. Good.

Extras: As a bonus there are two featurettes, which on the one hand highlight the franchise itself and the continuation in this spin-off (approx. 14:49 min.), on the other hand Michael B. Jordans preparation for the role under the magnifying glass (approx. 5:46 min.). In addition, there are 11 unused scenes (ca. 19:36 min.), which are primarily more quiet character moments. It becomes clear again and again that these scenes would have slowed down the narrative tempo over and over again. Still, there are some really strong scenes here. One of them is one in which it becomes clear that Rocky really had finished boxing and now has to face some painful memories again. Here he also looks at photos of his deceased wife and son, who was played in part 5 of Sage Stallone. The fact that Sage passed away in 2012 gives this scene a very special intensity, which Stallone has implemented with restraint but effectively. A strong moment that shows that Stallone really deserves the many awards he has received for the film.

Fazit: "Creed - Rocky`s Legacy" is a perfect mixture of nostalgia and a new beginning, a successful torch handover, which revives the franchise around the boxer Rocky Balboa, which was started more than 40 years ago. Greatly played and grippingly staged, this film is one of the big surprises of the 2016 cinema spring. The Blu-ray presents the US cinema hit in good picture and sound quality. The bonus material could have been a bit more extensive, but the edited scenes alone are definitely worth a look. Therefore, the bottom line for this disc is one: absolutely recommended!