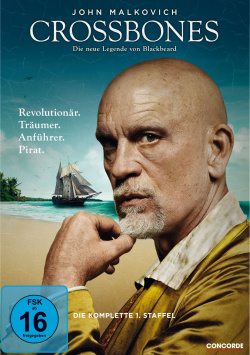 Film: At the beginning of the 18th century the British Empire reached the peak of its power. A fifth of the world's population lives under the flag of the kingdom, and the Empire also provides the largest armed force on the sea. But storms, hunger and, of course, pirates are increasingly afflicting the British Navy. In order to expand their position of power, a device is to be developed that will enable the ships of the Navy to navigate with great precision and thus always be one step ahead of pirates such as the dreaded Blackbeard (John Malkovic). When the brilliant scientist Nightingale developed such a chronometer, the doctor and assassin Tom Lowe (Richard Coyle) was commissioned to bring Nightingale and the device safely to London and to prevent it from falling into Blackbeard's hands under any circumstances. And if possible, he should also kill the pirate. In fact, the pirate's men are raiding the ship. To complete his mission, Lowe destroys the device, sets the records on fire and tries to kill Nightingale. Together with the scientist, who is struggling for his life, he is brought to the island of New Providence, where Edward "Blackbeard" Teach rules a group of outlaws. After Lowe succeeds in convincing Blackbeard that he needs him to decipher the plans for the replica of the chronometer, an exciting time on New Providence begins for the doctor. He is increasingly torn between his mission and his growing respect for the pirate. And then there's young Kate (Claire Foy), with whom he quickly falls in love. Soon the question arises whether he can still serve the British Empire faithfully under these circumstances...

"Crossbones" is after the "Black Sails" produced by Michael Bay the second pirate series that was produced last year for American television. But even though the opening sequence already serves some expected clichés with a bombastic sea battle and a brutal pirate attack, "Crossbones" finally tries to distance itself from them. This succeeds primarily through the way in which John Malkovic portrays the legendary pirate Blackbeard. Malkovic's game always walks close to the border to madness. His Blackbeard is a mixture of charismatic leader and insane beast, sometimes changing these two sides in a fraction of a second. This makes it easy to understand why he radiates a certain fascination on Lowe.

The life of the pirates on their island does not necessarily correspond to the image conveyed by classic pirate films or the "Pirates of the Caribbean" series. Sure, there are some very clear clichés and quite one-dimensionally drawn characters. Also, the romance between Lowe and Kate is not really a prime example of originality. And yet the series brings a breath of fresh air into the genre, which surely could have been even stronger if the series had had time to unfold further.

However, since the ratings were not right, the plug was pulled again after this rather short season with 9 episodes. What remains is a good adventure series against an exotic backdrop that can score points with good actors and exciting stories. Sure, there are some lengths, a few clear logic holes and also some dialogues that aren't quite award-worthy. But that doesn't change the high entertainment value of this short-lived series. If you want to see a wonderfully diabolical John Malkovic and a somewhat different pirate story, you should definitely take a look here. Worth seeing!

Picture + sound: The picture on the DVD is absolutely clean and pleases with a very high picture sharpness, which shows hardly visible quality losses even in the dark scenes. The colouring is dominated by very warm, powerful tones, appears overall very harmonious and atmospheric. The black values are well balanced, which also has a positive effect on the contrasts. All in all, there's really nothing to complain about here. The same applies to the sound, which offers an absolutely successful surround feeling especially in the more action-packed moments. Good.

Fazit: "Crossbones" is an exciting pirate series, which can score with a charismatic main character, stirring storylines and exotic backdrops. Although the story itself is very conventionally structured and some characters are drawn rather one-dimensionally, the makers always manage to skilfully avoid the classic cliché cliffs of the genre. Since the series did not manage to reach a large audience after the spectacular opening sequence, "Crossbones" was unfortunately cancelled after the first season. That doesn't change the fact that these nine entertaining episodes have good entertainment and a usual good John Malkovic to offer - enough to make it enough for a "recommendable" one despite missing extras!