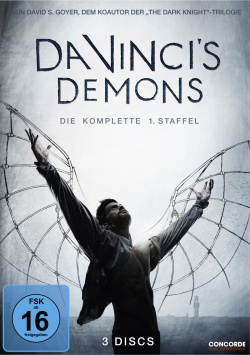 Contents: 25 year old Leonardo da Vinci (Tom Riley) lives in Florence in the late 15th century. As a freethinker, the painter, sculptor, architect and inventor repeatedly makes a nasty impression on the authorities. Secret and very powerful opponents oppose him and his quest for knowledge and change. After meeting the mysterious Turk Al-Rahim (Alexander Sidding) he learns about the mysterious "Book of Leaves" and does everything he can to find it. Because he is convinced that he will find answers here to what happened to his mother, who disappeared when he was a child. With the help of his assistant Nico (Eros Vlahos) and his buddy Zoroaster (Gregg Chillin) he sets off on a search. But intrigues and conspiracies in the highest ranks of power stand in his way, as do his secret passion for the beautiful Lucrezia (Laura Haddock)...

With "Da Vinci`s Demons" series creator David S. Goyer's paths are similar to those of his script for "Batman Begins": he tells of the origins of a well-known character and thereby tries to reinvent them. In the case of the portrait of Leonardo Da Vinci, one can certainly argue about the historical accuracy that Goyer displays here - but not about the entertainment value of the series. Already the visual realization builds up a captivating atmosphere, which is supported by the excitingly told stories, the neat effects, the handsome equipment and the convincing actors. It may be that the scripts lack a bit of depth and cleverness here and there, as you can see in other high-quality TV series like "Game of Thrones". But the series makes up for that with a very worth seeing mixture of humor, tension and eroticism.

The intrigues Da Vinci gets involved in during the first season are dramaturgically perhaps a little clichéd, but nevertheless extremely captivating. This makes it very easy to get lost as a viewer in this version of Florence and to be captivated by the many successful ideas of the authors. Tom Riley gives the young Da Vinci a convincing blend of youthful arrogance, charm and obsession. He gives the character enough facets to make him a very interesting character. Riley is supported by a very good cast of actors, which manages very well to fill the at times rather one-dimensional characters with life.

"Da Vinci`s Demons" may have its weaknesses. But even if the series is not one of the best that is currently offered on television, the high quality of current TV productions is again evident here. Entertaining, exciting, visually wonderfully realized and very well played - "Da Vinci`s Demons" has more qualities to offer than many an expensive cinema production. If you are simply looking for good entertainment with high show values and don't attach importance to an accurate historical implementation, this successful first season can be warmly recommended to you. Absolutely worth seeing!

Picture + sound: The very clean picture of the DVD presents the series in atmospheric colors and with a good to very good overall sharpness. Especially in brighter scenes, smaller details come into their own. The Dolby Digital 5.1 Mix is pleasantly lively for TV production and, in addition to well-tuned dialogues, offers numerous smaller and larger sound effects that provide audible movement in the surround range. Good!

Extras: Since only the first DVD was available for testing, the bonus material could unfortunately not be viewed. But a look behind the scenes, interviews and dropped scenes are announced.

Result: "Da Vinci`s Demons" is an exciting series with high show values. Seasoned with fantasy, eroticism and exciting intrigues, this fictional look at the life of the young genius is not always particularly logical, but it is absolutely worth seeing in every second. The good cast, the captivating score and the great production design make small dramaturgical weaknesses quickly forgotten. And that's why for the first season consisting of 8 episodes the following applies: Absolutely recommendable!