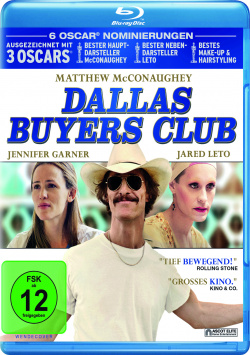 Film: Dallas, 1985: Ron Woodroof (Matthew McConaughey) is a cowboy of real shot and grain. Alcohol, rodeo betting, coke and fast sex determine his everyday life. He's a whole guy who loves women and hates gays. Therefore he does not want to believe the young doctor Dr. Eve Saks (Jennifer Garner) when she tells him that he is HIV positive. But soon his weakening body proves that he has been infected with the "gay disease" virus. But Ron does not want to accept the prognosis that he has only 30 days left to live. He procures AZT, the only legal drug in the USA for the treatment of HIV. But when this drug does him more harm than good, he seeks help beyond the borders. When he actually finds medicines in Mexico that help him, he has the idea of smuggling them into the USA and selling them there profitably to other infected people. With the help of the transsexual Rayon (Jared Leto) Ron founds the "Dallas Buyers Club", which quickly becomes a great success - to the displeasure of the FDA (Food and Drug Administration), which wants to turn the clock on this business model as quickly as possible...

"Dallas Buyers Club" is based on the true story of Ron Woodroof, who died in 1992. A few weeks before his death, screenwriter Craig Borten had met with Woodroof and talked in long interviews about his life and his fight against AIDS. Following intensive research, Borten wrote his first screenplay version of the inspiring story in 1996, but it was only fifteen years later that it could be realized. Director Jean-Marc Vallée ("Young Victoria") has taken care of Borten's screenplay, which has been reworked several times in the meantime, and has produced a stirring film out of it, which manages without pathos and exaggerated sentimentality and works so well just because of that.

The fight of a single man against the windmills of bureaucracy and the supremacy of the American pharmaceutical companies is traced with astonishingly much biting humour but also with a great deal of sensitivity, whereby his very personal transformation from homophobic cowboy to pioneer of the rights of HIV-infected people stands at the side of gay and lesbian associations in the focus of the action. It is precisely because Vallée and Borten do not over-stylize Ron Woodroof into a lacquered hero, but rather show him as a normal person with mistakes, corners and edges that the production becomes so credible and moving.

However, even the best script and the most successful production would be ineffective in a film that is so carried by a character if the wrong main character had been chosen. But what Matthew McConaughey delivers here is really, really great cinema. With acting brilliance, he embodies a man who doesn't want pity, but simply isn't willing to surrender to his supposed fate. Instead of fading away in the hands of doctors and pharmaceutical companies, he takes his destiny into his own hands and in many respects outgrows himself. Yet this figure is not a real popular figure, especially at the beginning. He is loud, rude, sexist, racist and homophobic. And yet McConaughey manages to get the audience on his side quickly - and not (only) because he is infected with a deadly virus.

Embedded in Vallée's very grounded staging, McConaughey's play unfolds a power you wouldn't have expected from the smart surfer type actor in this form, even though Matthew McConaughey has of course already delivered some really strong performances during his career. But this portrayal, for which he really devoted himself with body and soul, is something very special. And yet he skilfully avoids playing his co-stars completely against the wall. He leaves Jared Leto a lot of room to impress with his portrayal of a drug-addicted, AIDS-stricken transsexual.

It is a great feat that the actors and the makers have managed to tell such a difficult, unfortunately still very important and much too often tabooed subject with the appropriate respect, but also with a lot of cynical humor and life-affirming ease. Thus, "Dallas Buyers Club" has not only become a great acting movie, but also an excellent entertainment movie, which, despite all its emotionality, really encourages and leaves the viewer with a positive feeling. And that's clearly one thing: Absolutely worth seeing!

image + sound: The absolutely clean image of the Blu-ray captures the 80s look of the movie very well. The colours are very warm and powerful and the sharpness is very high in most moments. The good black values and the resulting first-class contrasts additionally support the very positive overall impression. The sound mix doesn't really demand the surround channels, but presents what this film is all about in a way that is easy to understand and harmoniously coordinated. Good!

Extras: In addition to a cinema release announcement by Matthew McConaughey (approx. 0:20 min.) and shots from a Photocall in Berlin (approx. 2:17 min.), there is also a miniature featurette (approx. 4 min.); which, however, is not much more than the trailer pimped up with a few statements from the actors. Uncommented B-Roll recordings (ca. 4:04 min.), interviews with Matthew McConaughey (ca. 2:19 min.), Jared Leto (ca. 2:43 min.), Jennifer Garner (ca. 2:30 min.), the producers Robbie Brenner (ca. 0:33 min.) and Rachel Winter (ca. 0:25 min.) as well as director Jean-Marc Vallée (ca. 1:17 min.), and a promotional clip for the 30th anniversary of the German AIDS Hilfe (ca. 0:54 min.) round off the very promo-heavy bonus material.

Fazit: "Dallas Buyers Club" is a gripping drama, which works perfectly both as a demanding, rightly Oscar-worthy actor cinema for McConaughey and Leto, and as a pure entertainment film. A movie that gives courage and despite the difficult subject matter conveys a certain feeling of happiness. The Blu-ray is technically absolutely convincing, but the bonus material is a bit too promo-heavy to offer really interesting insights into the shooting or the true story. Nevertheless there is one clear thing for the disc: Absolutely recommendable!