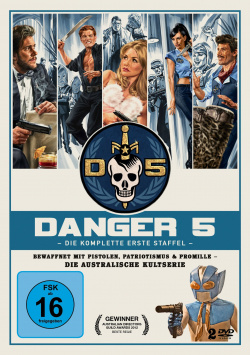 Contents: What comes out when you throw "James Bond", the "Thunderbirds", the cult comedy "Top Secret", "Team America" and "Austin Powers" into a mixer? The answer is the Australian series "Danger 5", a wonderfully bizarre and trashy series about the adventures of five international spies who have only one mission: to kill Hitler. Jackson (David Ashby) from the USA, Tucker (Sean James Murphy) from Australia, Ilsa (Natasa Ristic) from Russia, Claire (Amanda Simons) and Pierre (Aldo Mignone) from France are fulfilling their daring missions around the globe. Even in Atlantis, they have to deal with Hitler's minions. But no matter if they have to fight against Nazi dinosaurs or robot soldiers, the team of Danger 5 always manages to get out of even the most hopeless situations. But will they ever be able to do their actual job successfully?

The humor of "Danger 5" is already very special. Whether the fact that the boss of Danger 5 has an eagle's head or Hitler's dog is all too obviously a rag doll, whether the Nazi zeppelin stealing the Eiffel Tower in the first episode looks like it's hanging on wires or a magical waving cat suddenly appears, there's really no ordinary mainstream humor here. But even though the whole thing has a deliberately trashy flair, on closer inspection the series is a very lovingly equipped homage to the agent film of the 60s, which skilfully plays with all the clichés of the genre and then makes something very special out of it.

It's very worthwhile not only to pay attention to the many wonderfully absurd jokes that take place in the foreground. Because even in the background there are often little things hidden that make you smile and reveal how much fun and attention to detail everyone involved was at work here. The fact that the series is not published synchronized in this country is even an advantage in this case. Because of the multilingualism (among others English and German) and the different accents the series gains enormously in charm and wit, which would have been lost in a complete dubbing in any case.

The individual episodes of this first season, which always end with a wonderfully absurd commercial, are almost always on a quality level. So if you already have problems with the humor in the first episode, you won't be able to make friends with "Danger 5" in the further course. But if you have tears in your eyes after only a few minutes of laughing, you will be offered three and a half hours of wonderfully original and whimsical entertainment, which friends of unadapted, weird TV food shouldn't miss. And another tip: make sure that the last episode runs until after the credits are over! Absolutely worth seeing!

Picture + sound: With bright colors and a harmonious retro look, the clean picture of the DVD can convince all along the line. Image sharpness and contrasts are on a consistently good level. The sound is only available in the original English (or multilingual) sound with German subtitles. The stereo mix also goes well with the retro feel of the series. The dialogues are mixed in a way that is easy to understand and some sound effects make sure that there is also a little bit of dynamism. Good!

Extras: On the first DVD there are all five episodes (about 25 min. in total) of the webisode "The Diamond Girls". On the second disc there are then some interviews with Cast & Crew (approx. 23:18 min.), whereby the statements are enriched with Behind the Scenes material. In addition, there is also a look behind the scenes of the Art Department (approx. 10:21 min.), in which the many small details of the equipment are discussed. Gut!

Fazit: "Danger 5" is a wonderfully bizarre, wacky and trashy agent parody that hits the bull's eye with its very special humor. Although the adventures around the Danger 5 team don't make any sense at all, they are all the more fun. A successful mixture of "Team America", "Top Secret", "Austin Powers" and "James Bond", which should not be missed by lovers of especially weird serial fare. absolutely recommended!