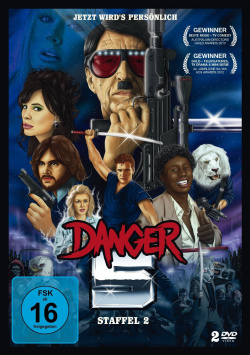 Content: It's Christmas in the colorful 80s! But for the team of Danger 5 it doesn't get festive when Adolf Hitler (Carmine Russo) kills their boss. The international agents Jackson (David Ashby) from the USA, Tucker (Sean James Murphy) from Australia, Ilsa (Natasa Ristic) from Russia, Claire (Amanda Simons) and Pierre (Pacharo Mzembe) from France have to join forces again to kill Hitler once and for all. They don't only have to deal with ninjas, dinosaurs, zombies and Hitler's deadly pee-peak, but also have to travel back to high school and even back in time. But Hitler and his henchmen always seem to be one step ahead of them. Will the team of Danger 5 succeed this time to free the world finally from Hitler?

The humor of "Danger 5" was already special in the first season. If this was still settled in the 60s, it goes now with full throttle into the shrill 80s. The first episode of the second season, however, does not suggest much good. The gags are strangely flat and the many little bizarre ideas, which still seemed very charming in season 1, are used here completely exaggerated (e.g. characters with animal heads). Of course there are also some nice laughs here, but the special flair of the earlier episodes is simply missing. Although their quality will not be reached until the end, the humor curve will go clearly up again with the second episode. When the typical 80s high school comedies and teen slashers are pulled through the cocoa here, you can forgive the somewhat flatter jokes.

In the course of the season the family sitcoms so popular in the 80s ("Hitlers Haus"), the Power Rangers, "Back to the Future", Vietnam dramas, cop movies or even zombie movies will be targeted. The makers captured the Eighties look perfectly in the clothes, as well as in the hairstyles, the equipment and the music. Hitler himself proves to be a master of deception in every episode, sometimes as an old man with a hat ("Hitler wears no hats"), sometimes as an FBI agent, as a father, as a pupil or as an undead. It's often so wonderfully stupid that it's funny again. Nevertheless a few notes less would have done the season good.

On the other hand the decision that the series was not dubbed for release in Germany had a very positive effect again in season 2. Because of the multilingualism (including English and German) and the different accents, the series gains enormously in charm and wit, which would have been lost in a complete dubbing in any case. So "Danger 5" is also despite the fact that the new episodes are not as funny as those of the first season, also in the second year again wonderfully crazy trash, which has so wonderfully stupid ideas to offer that these actually only under the influence of mind-altering substances can have originated. This may not work for everyone. But fans of the first season should definitely take a look and not be deterred by the not so well done first episode. Worth seeing!

Picture + sound: With bright colours and a harmonious 80s look the clean picture of the DVD can convince all along the line. Image sharpness and contrasts are on a consistently good level. The sound is only available in the original English (or multilingual) sound with German subtitles. The stereo mix also goes well with the overblown trash retro feeling of the series. The dialogues are mixed in a way that is easy to understand and some sound effects make sure that there is also a little bit of dynamism. Good!

Extras: All episodes have an audio commentary by Dario Russo and David Ashby. Even though there are unfortunately no subtitles, the comments are absolutely worth listening to for viewers with good English language skills.

Fazit: "Danger 5" unfortunately didn't quite succeed in the second attempt, like the wonderfully weird first season. By trying to top them, many gags simply overshoot the mark and are no longer clever in their exaggerated manner, but simply stupid. But luckily, there are also many well done and really funny ideas that at least make up for some of the shallow moments. The DVD is technically well done and the (unfortunately not subtitled) audio comments of the makers in the bonus material are really worth listening to. Despite some weaknesses this is enough for an absolutely deserved one: Recommendable!