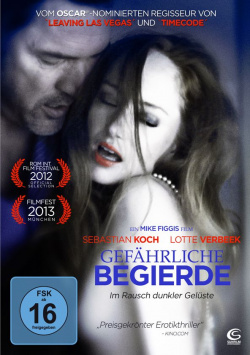 Contents: His last success was some time ago and even his latest work just doesn't want to get going. Screenwriter and writer Martin (Sebastian Koch) has truly experienced better times. But after the mysterious disappearance of his wife 15 years ago, he finally managed to get his life back on track. But when he meets the seductive Frenchwoman Angelique (Lotte Verbeek) at the party for the 25th birthday of his daughter, the aspiring actress Sarah (Rebecca Night), this order is suddenly destroyed. Because the next day the young woman is found dead in the Thames. Although Martin is not directly considered a suspect, the investigating Commissioner Bullock (Kenneth Cranham) sees parallels to the disappearance of Martin's wife. When Angelique's twin sister Therese shows up in London, Martin gets into a dangerous maelstrom of seduction, lies and fraud...

Mit "Dangerous Desire" is the double Oscar-nominated director Mike Figgis ("Leaving Las Vegas") trying to present an erotic thriller that blurs the boundaries between fiction and reality. In order to achieve this, Figgis applies the rules of script writing, which he integrates directly into the picture for the viewer to see. Then figure descriptions and script instructions appear in the picture or split screen and other effects are applied. For example, the scene in which Martin flies to France to learn more about Therese is abbreviated by a screenplay excerpt read aloud. Instead of showing everything, the viewer gets something like "Montage. A jet takes off, lands in France. Martin rents a "car" to listen to.

That way Figgis always leaves the viewer unclear whether he is following Martin's latest script or actual events from his life. This is an exciting and unusual approach, through which the film arouses great interest, at least among viewers who are open to unusual narrative forms. Yet, especially in the second half of the movie it becomes clear again and again that with his high ambitions he seems to be putting himself on the spot. Because when Martin explains to his students at the beginning, to whom he tries to teach the high art of script writing, that you owe the viewer a good ending after an interesting beginning, you expect this all the more from a film that relies so much on the play with cinematic rules.

However, Figgis loses himself more and more in the confused story, whose structure is simply more interesting than its resolution. Moreover, on a purely visual level, the feeling remains that the director's ambitions were simply too high for the small budget available to him. The good actors can only compensate for this shortcoming slightly, which is why "Dangerous Desire", despite good ideas and an interesting initial situation, is unfortunately only worth seeing for lovers of more experimental Arthaus cinema.

Picture + Sound: The picture has a slightly subcooled appearance, which absolutely does justice to the atmosphere of the story. Otherwise, the colouring, sharpness of the images or contrasts are all on a good level, but in all areas there would still have been plenty of room for improvement in terms of quality. This also applies to the sound, which presents itself very unagitated. However, in view of the rather subliminal threat to the staging, this is absolutely appropriate, which is why there is a satisfied "good" for the technical implementation!

Extras: As a bonus, there is only the trailer and further program tips from the provider.

Result: With "Dangerous Desire" the Oscar-nominated director Mike Figgis tries his hand at an erotically charged thriller that repeatedly mixes the levels of fiction and reality. This has interesting and also effective aspects, but especially in the second half a better and more thrilling script could have stood well. So it's only enough for a somewhat bulky movie noir, which doesn't make full use of its very good basic idea. The good actors and the play with the different levels make the work, despite its lengths and dramaturgical hangers, still worth seeing especially for film fans and lovers of experimental arthouse cinema!