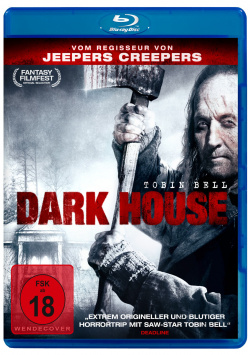 Film: Nick (Luke Kleintank) never had a light one in his life. Again and again he is plagued by strange visions that are particularly intense when he touches someone. He seems to have inherited this gift from his father. But his psychologically disturbed mother takes the truth with her to her grave when she dies in a fire in a mental hospital. Eight months after her death, Nick learns that she has inherited the house in Rivers End, which he has seen again and again in his visions, although he has never been there before. Together with his highly pregnant girlfriend Eve (Alex McKenna) and his buddy Ryan (Anthony Rey) he sets off for Rivers End just to find out that the place was destroyed by a flood disaster. However, a group of surveyors claims to have seen the house in an abandoned valley. Together the troops set off on a search for the property. When they find it, a bloody nightmare begins for Nick and his companions, from which there seems to be no escape...

The director Victor Salva, more than controversial because of his inglorious past, returns with "Dark House" to the genre, which he had enriched with a really successful contribution in 2001 with "Jeepers Creepers". However, his latest work with "SAW" villian Tobin Bell in a supporting role can't come close to the quality of this. For this the story is too confused, the dialogues too flat and the actors too wooden. The fact that the movie still works is due to the very atmospheric staging, which scores with a well-done set and well-chosen locations. Here, some nice moments of tension and small splatter interludes of the uncanny axe men can unfold well.

In view of the well done aspects, it's a shame, of course, that the script turned out to be very weak despite good ideas and surprising twists. The story itself doesn't disappoint as much as the one-dimensionally drawn characters and the sometimes very shallow dialogues that are put into their mouths. As a result, the film wastes much of the potential inherent in the story. And even the atmospherically dense direction can't completely compensate for this weak point.

Although "Dark House" is not a milestone of the genre and the film is even downright disappointing in some aspects, it can't be denied a solid entertainment value. Because even though some scenes may seem unintentionally funny, it never gets really boring in Rivers End. Despite all his weaknesses Victor Salva has staged an entertaining mystery horror, which even manages to surprise his audience a little bit in the last third. So Salva hasn't completely forgotten his craft since "Jeepers Creepers". In the end it is still enough - with a few small compromises - for a satisfied one: Worth seeing!

Picture + sound: Even though the film cannot technically compete with expensive large-scale productions due to its rather small budget, the picture and sound quality of the Blu-ray is at an absolutely satisfactory level. The image is very clean, the splashing film blood comes into its own thanks to a powerful colour mix and the image sharpness also leaves a positive impression. The sound is determined by the very centrally mixed dialogues, but atmospheric sound effects always ensure a pleasant utilization of the surround channels. No audiovisual revelation, but for a small genre like this it's definitely good!

Extras: As a bonus the Blu-ray only has the trailer to offer.

Fazit: "Dark House" is solid mystery horror with some nice slasher effects. In terms of acting, he has just as great weaknesses as in the dialogues. However, some nice twists and the atmospheric direction make sure that the movie is still worth seeing for genre fans. The Blu-ray presents the dark horror trip in appealing picture and sound quality. Only with the extras does the disc disappoint all along the line. But the bottom line is that this is still enough for a satisfied one: Recommendable!