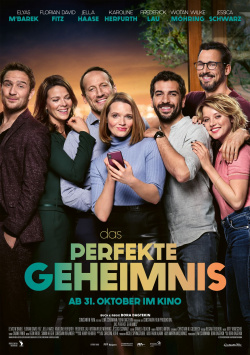 Whether that was such a good idea? At a dinner between friends, when a friend of a friend talks about a friend who left him after she found treacherous foreign messages in his cell phone, the resulting discussion about honesty culminates in an explosive game: Everyone puts their smartphones on the table, and during the entire dinner all incoming messages are read out, all phone calls are set to loud and all WhatsApp messages are shown. Sounds funny? It is at the beginning - until the first delicate secrets are revealed and the seemingly perfect facade of the circle of friends begins to crumble. Whether they will all still leave the restaurant as couples and friends is soon written in the stars…

"The perfect secret" is inspired by the Italian movie "Perfetti Sconosciuti" by Paolo Genovese from 2016 (2.7 million visitors in Italy alone). In numerous countries such as France, Spain, Korea and Turkey, the film was adapted and became a worldwide phenomenon. In Germany only the French version "Le Jeu" by Fred Cavayé has been released on Netflix so far. In a direct comparison, the version by "Fack Ju Göthe" director Bora Dagtekin does better, as she has better timing especially in the comedic moments. Apart from that, the movies are almost identical up to the last act - apart from the same penetrating way of placing surreptitious advertisements, which already attracted negative attention in "Fack Ju Göthe". But as with the humor, Dagtekin simply doesn't seem to be a friend of the subtle kind.

Yes, the jokes are a bit too flat at times, but are rescued by the wonderfully biting dialogues elsewhere. All in all, however, the film lives from its basic idea and from the good-humoured ensemble, in which Elyas M’Barek and Florian David Fitz, who are a little against the grain, are particularly convincing. The joy of playing of the actresses and actors is infectious and also makes for a high entertainment value at somewhat weaker moments. Moreover, as a viewer you always catch yourself thinking about what you would rather keep secret on your smartphone and how much you trust your partner. What secrets could he/she have? Do you really want to know everything? Or what secrets could really shake the foundations of your own relationship?

You can also see in "The Perfect Secret" why the original idea of the Italian original works so universally well and meets with so much viewer interest everywhere. Whether this German remake with its very own end belongs to the more successful versions, remains to be seen at this point. The fact is that the finale of the original with its twist is clearly more interesting and also more socio-critical. Dagtekin, who despite many almost identical dialogues in comparison to the French remake surprisingly calls himself the only scriptwriter, prefers to serve his viewers a more clearly structured happy ending. Kind of a shame. Nevertheless, this doesn't change the fact that the movie is an entertaining comedy with some weaknesses, but also with a lot of discussion potential. But there is then, with small deductions in the B note, quite a deserved: Worth seeing!