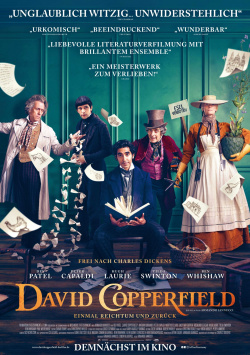 David Copperfield - Once Rich and Back

A well-known figure of world literature comes to the cinema with his turbulent story: David Copperfield (Dev Patel), conceived by Charles Dickens. In a rather free interpretation by Armando Iannucci, we follow Copperfield through his childhood, which catapults him from a once sheltered parental home into a dreary existence as a worker in a bottle factory. There he works until he is a young man. After the death of his beloved mother he ends up with his eccentric aunt Betsey Trotwood (Tilda Swinton), where he makes friends with her no less eccentric lodger Mr. Dick (Hugh Laurie). But all this is just the beginning of a turbulent journey that brings David Copperfield together with very different people and hopefully brings him to the longed-for goal: He wants to become a writer and make the world a better place with his stories.

"David Copperfield - Once Rich and Back" is a somewhat wacky, colourful and overdrawn film that can score with its bizarre characters, visual gimmicks and offbeat humour. The staging is very artificial and overexcited. Iannucci presents here anything but a typical history film. Rather, his adaptation is a hodgepodge of grotesque moments, which at times seems like a stage production. Admittedly, this takes some getting used to and at some points it's also a bit exhausting. But this is also how the film gets a style, that isn't just wilful, but also very individual. And that's a lot of fun.

Once you have succeeded in getting involved with the little subtle play of the ensemble and the unadjusted staging, you are quickly drawn into the sometimes dreary, sometimes very colourful world of David Copperfield. And there is already a lot to discover on a visual level. It may be a little confusing at times, how quickly one jumps from one stage of the life story to the next. But it's rather the small details that leave a real impression and give the movie a good entertainment factor.

With a charming Dev Patel, a loveable eccentric Hugh Laurie, a wonderfully cold Tilda Swinton or the nice unpleasant Ben Whishaw the movie has a first-class cast. This ensemble alone makes the purchase of a cinema ticket absolutely worthwhile. If you have a penchant for offbeat humour, playful sets and creative literary adaptations, then it's clear that this film is also worth seeing!