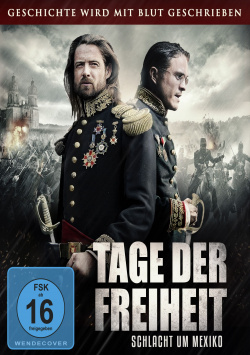 Contents: Mexico in 1861: After many years the bloody reform war is finally over. The country lies in ruins and is completely bankrupt, so the president has to stop repaying the foreign debt. In this situation, it is easy for the conservatives, who have fled to Europe, to get the French, Spanish and English to invade Mexico. While the Spaniards and the English want to engage in peace talks with the Mexican government, the French want a war of conquest. In the year 1862 this also seems inevitable. A war would quickly be over, as the Mexican army is hopelessly inferior to the enemy in terms of both numbers and equipment. The young soldier Juan is also sent into battle against his will. After trying to desert together with his girlfriend Citali, he had to watch his best friend get killed. Now he wants to fight in his memory for freedom and democracy. It's men like Juan who took an unexpected turn in the May 5, 1862 war...

"Days of Freedom" tells of one of the most important chapters in the history of Mexico. Director Rafa Lara takes a lot of time to trace the events that led to the battle on today's national holiday, the Cinco de Mayo. He concentrates primarily on the political level, but tries to give the whole thing a human face through the history of Juan and Citali. In doing so, he follows the usual pattern for the genre of modern historical film of telling a dramatic love story against the background of a historical event. However, this is far less striking than in many other representatives of the post-"Titanic" era.

With strong pictures and a very authentic look Lara succeeds very well in drawing the viewer directly into the events and never making it seem too dry or boring despite long dialogues about military tactics. The actual battle is extremely stirringly staged and excellently filmed. Even though the movie has some small weaknesses on a dramaturgical level, it really offers a lot of cinema, especially in the fighting sequences. And even if interested viewers might be aware of the outcome of this David versus Goliath story, the last third of the film is staged in such an exciting way that you can't help but be feverish with Juan and the other Mexican soldiers in their fight for freedom.

"Days of Freedom" doesn't reinvent the genre of the historical war film. Nevertheless, the work, which is one of the most expensive productions in Mexican cinema, offers enough power and show value on a visual level to offer its viewers an exciting and moving history lesson. And for that there is a clear one: Worth seeing!

Picture + sound: The very clean image of the Blu-ray convinces with a somewhat undercooled, very earthy color scheme and a good overall sharpness. In darker scenes some details are swallowed up, but overall the very positive overall impression prevails. The DTS-HD Master Audio 5.1 mix can unfold its full potential especially during the big battle towards the end of the film. The dialogues sound powerful, yet very centrally mixed, while sound effects such as explosions, shots or rain provide a lot of movement on the surround channels. Good!

Extras: As a bonus the Blu-ray has a worth seeing Making of (approx. 23:53 min.) to offer, which consists of many recordings of the shooting and interviews. There is also a music video (approx. 4:59 min.) and the trailer for the film. Gut!

Result: "Days of Freedom - Battle and Mexico" is a visually stunning war movie that details the legendary battle of May 5, 1862. Through the storyline around the simple soldier Juan and his girlfriend Citali the story also gets an emotional level, which has been implemented very stirringly. The Blu-ray presents the film in very good picture and sound quality and also has a worth seeing making of to offer. Recommended for friends of rousing war movies!