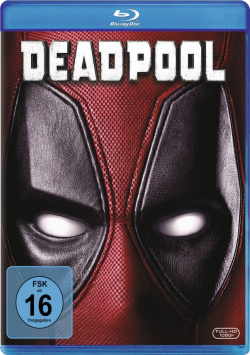 Film: Allow, Deadpool - Marvels most unusual and in any case most obscene superhero. After he already had a small, rather inglorious appearance in "Wolverine", he finally gets his own movie, which this anti-hero actually deserves already a long time ago. Tim Miller's directing debut tells the story of former mercenary Wade Wilson (Ryan Reynolds), who is about to change his life for his great love Vanessa (Morena Baccarin) when he learns that he has incurable cancer. In his despair, he is persuaded by a mysterious stranger to undergo a very special treatment that would not only cure his cancer, but also make him mutate into a superhero. But in the hands of the sadistic Ajax (Ed Skrein) he must suffer unimaginable torments that would terribly disfigure him and eventually even kill him. But at the last moment he can escape and swears by revenge. As Deadpool he hides his scars under a mask and chases his tormentors in a red latex suit with a loose mouth. Not only did they take away his good looks, they also took away the opportunity to live happily with Vanessa. And for that Ryan Reynolds had his first appearance as Wade Wilson in the "X-Men" offshoot "Wolverine" from 2009. But the potential of this character was completely given away here when they decided to sew up Deadpool's mouth. Thus, he was degraded to a silent footnote in an anyway somewhat disappointing movie, which this popular anti-hero really doesn't deserve. Reynolds himself has fought for a long time for Deadpool to finally get its own movie that does justice to the disrespectful tone of the comic. And it was worth the wait. Because with "Deadpool" director Tim Miller presents an extremely amusing, wonderfully exaggeratedly brutal and pleasantly unadapted contribution to the ever-growing Marvel universe.

Additionally, the humor is a bit special. The opening credits are extremely brilliant and show that the movie doesn't take itself, its genre and its makers too seriously. Furthermore, some gags go to a great meta-level when Deadpool makes fun of the studio, X-Men actors or Ryan Reynolds and sometimes even speaks directly to the audience. The word joke, which fortunately was very well translated into German, is sometimes a bit rough, then again extremely clever and often really funny. Only from time to time the whole thing goes beyond the goal, becomes unnecessarily raunchy or a bit too flat to be able to provide a hearty laugh. But the well-done moments are absolutely in the majority, which makes the movie a real pleasure.

As a superhero movie "Deadpool" can also convince in terms of action. When Deadpool messes with the bad guys, body parts fly around the ears of the audience - but everything is so mercilessly overdrawn that the FSK release from the age of 16 is a little surprising, but in the end completely ok. Besides the humor and the action there are also other aspects in which the movie works very well. So the chemistry between Reynolds and Morena Baccarin is perfect and although her love story isn't told in a good Hollywood manner, she is still very romantic in her very special way. You can see what Vanessa Wade means, which also makes the more dramatic scenes look very believable. This also skilfully prevents the film from completely degenerating into a clobber.

All this sounds like a great pleasure. And that's "Deadpool" too - with a few point deductions in the B grade. So Ed Skrein is simply too colourless and too uninteresting to be a real threat as Ajax is the villain in charge. His henchwoman Angel Dust alias Gina Carano ("Fast & Furious 6", "Haywire") is great, but he himself is probably the weakest part of the movie. And then there's the X-Men Colossus, a completely CGI-animated character who also doesn't really want to convince. Thus, the overall impression is not sustainable, but at least slightly clouded. In the end, "Deadpool" is extremely entertaining action cinema with a wonderful anti-hero. Not an absolute cult film that revolutionizes the genre, but at least it mixes up the world of cinema superheroes with a good portion of fresh wind. Absolutely worth seeing - and really nothing for children!

picture + sound: Anything but first-class quality would have been a bitter disappointment with this Blu-ray. The picture is absolutely clean and the colors are mixed very atmospherically. The image sharpness is also very high and allows even the smallest details to come into their own. In addition, the film also has a pleasant picture depth, which is especially effective in the action sequences. The powerful and very lively sound mix is also convincing all along the line. Numerous sound effects ensure that the surround channels are almost completely in use. All in all there is a deserved one here: Very good!

Extras: The Blu-ray has a lot of good bonus material to offer. It starts with two audio commentaries, one by Ryan Reynolds with screenwriters Rhett Reese and Paul Wernick, and one by director Tim Miller with Deadpool co-creator Rob Liefeld. Both comments have very interesting as well as amusing moments to offer. Those who are primarily interested in the film should listen to the amusing commentary with Reynolds. If you want to learn more about the comics and the technical aspects of the production, don't miss out on the second commentary.

We continue with missing or extended scenes, which can be played with an optional commentary by the director (approx. 19:14 min.). A mini guest appearance by Nathan Fillion alone and another side blow to Green Lantern make these additional scenes absolutely worth seeing. There are also some outtakes (approx. 6:12 min.) and picture galleries. A detailed, multi-part Making of (approx. 80 min.) should not be missing. Even if the content of the film is a bit too detailed, which of course you already know as a fan, this documentary is absolutely worth seeing!

Fazit: "Deadpool" is rough, brutal and politically wonderfully incorrect. This (anti)hero is truly nothing for children! But after his disappointing appearance in the first "Wolverine" movie, Deadpool is allowed to let the go in his first work of his own and to pull the wool over everything and everyone. The fans were enthusiastic and gave the film a worldwide income of more than 700 million dollars. Blu-ray and DVD exploitation should add another few dollars to this. The Blu-ray presents the film in first-class picture and sound quality and also has lots of good extras on board. Therefore we have the predicate: Absolute mandatory program!!!