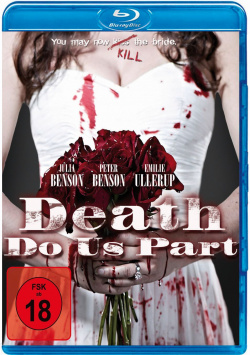 Death Do Us Part - Blu-ray

Film: Although she's in the middle of the wedding preparations, Kennedy (Julia Benson) lets her future Ryan (Peter Benson) persuade her to join her sister Hannah (Christine Chatelain), his best man Chet (Kyle Cassie), his cousin Derrick (Benjamin Ayres) and Kennedy's girlfriend Emily (Emilie Ullerup) in a bachelor party. Celebrate in the middle of nowhere, in a house by the lake. When they arrive there, the bride, after meeting the creepy caretaker Bo (Dave Collette) and discovering dozens of dead birds on the porch, is sure she wants to get home as soon as possible to continue her wedding. With much effort Ryan manages to persuade her to stay. A fatal decision, as it will soon turn out. Because when at the exuberant party in the evening suddenly the stream is gone and then Derrick disappears, the pure horror breaks through the friends...

After numerous short films the Canadian filmmaker Nicholas Humphries tries his hand at his first feature film with "Death Do Us Part". The result is a very conventional horror movie, that especially at the beginning sticks to genre-common clichés in such a way, that it almost seems involuntarily funny. Of course, the friends have to hold their celebration in the midst of the wilderness, of course the caretaker is a very scary contemporary and of course the protagonists ignore every sign of mysterious events that would have caused any reasonably thinking person to turn back immediately. But in the movie and especially in the horror genre logical and comprehensible behavior isn't always necessary.

Also the tensions between the characters aren't exactly original. There is a secret affair, high debts, a secret from the past and obsession. This is not really new, which wouldn't be too bad if the implementation worked. But Humphries can't give the whole thing its own note or create a thrilling atmosphere. And since he takes a lot of time until something really exciting happens, the first 50 minutes are dominated by cultivated boredom.

When the obligatory masked killer appears, the entertainment value increases considerably. There are indeed hundreds of very similar movies that have implemented this scenario in a better and more exciting way. But overall the staging here for a low budget slasher is absolutely solid and satisfactory. In the last act Humphries even tries to offer something like surprising twists. Surely who exactly pays attention will be little surprised by the killer's identity. Nevertheless, the ending still leaves a very conciliatory impression.

First here Humphries seems to have understood exactly what horror fans want to see. If he had presented what he had to offer in the last few minutes a bit earlier, more viewers would surely have looked over many a weakness in a benevolent way. So "Death Do Us Part" as a simply knitted low budget horror movie is okay, but nothing more. Those who expect a lot of blood, naked skin and a few good shock moments from a typical slasher will unfortunately be disappointed here. But if you want to see solid B-movie horror food without big surprises with a well done finale, you can risk a look here.

Picture + Sound: The Blu-ray image is very clean and has a good sharpness in the bright scenes, where even smaller details are clearly visible. In the numerous dark sequences, on the other hand, there are some visible quality losses in the overall sharpness. The sound is only available in a German DTS-HD MA 5.1 track. Lovers of original versions will find nothing here. The German soundtrack is mixed quite powerfully, whereby the dialogues clearly dominate the action. Smaller ambient noises and sound effects, as well as the music, provide a little movement in the surround range. No audiovisual revelation, but sufficient for a low budget production. Good!

Extras: Unfortunately the Blu-ray has no bonus material to offer.

Fazit: "Death Do Us Part" is a rather conventionally knitted low budget horror thriller, which just at the beginning serves a lot of clichés, only to at least try to provide some nice surprises towards the end. Even though the acting performances aren't exactly on a price-suspicious level and the dialogues are at times very flat, the movie works out quite well as what it wants to be. The Blu-ray presents the film in decent picture and sound quality, but without the original English sound. And there's no bonus material either. That's not enough for a buy recommendation, but if you estimate a solid horror fare according to a known scheme, you can take a look here.