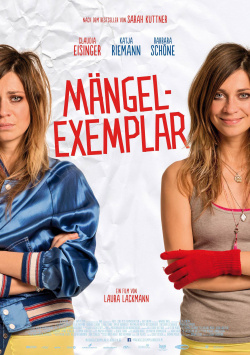 Actually Karo (Claudia Eisinger) always thought she was a normal young woman. Well, she has mood swings and occasional uncontrollable tantrums. But don't we all? But when she loses her job and even her best friend Anna (Laura Tonke) distances herself from her, Karo realizes that something is wrong. Therapy is supposed to remedy this. But unfortunately, in her quest to be the perfect patient, she does everything wrong and thus inexorably slides towards a deep depression. When she also loses her boyfriend and is harassed by constant panic attacks, she begins to realize that she is the problem herself. But that doesn't bring her any closer to a solution…

With her feature film debut "Mängeexemplar" Laura Lackmann dares to tackle a very difficult topic. Her film adaptation of Sarah Kuttner's bestselling novel of the same name tries to approach the subject of depression in a playful and humorous way, but also authentically. The problem is not that she didn't succeed, but rather that she did a little too well. How Claudia Eisinger describes the extreme mood swings, but also the extremely destructive egoism associated with the disease, is simply great. The result, however, is that Karo inevitably doesn't seem likeable to the viewer, but extremely exhausting. Watching her getting more and more lost in her depressions and threatening to destroy herself and her environment is really no fun, despite some very nice and amusing moments.

That Karo isn't the only dysfunctional person in the movie doesn't make things any easier. There are - apart from her grandmother - hardly any real sympathizers with whom you like to spend your time as a viewer. At the beginning the whole thing still comes along refreshingly humorous and biting. The movie is really fun and lets you hope for an entertaining comedy with lots of corners and edges, in which you will gladly accept the broken or unsympathetic characters. But - and this is what the disease treated here brings with it - the humour with the advancing symptoms is giving way more and more to the literally depressing drama. And I'm afraid that's very, very exhausting.

From a purely theatrical point of view, "Defect copy" is really fascinating. Claudia Eisinger plays the role extremely well and extremely authentically. Those who know someone who is manic-depressive will recognize much of it in their intense play. If you only want to judge the movie by it and just want to see very good acting cinema, you shouldn't miss the movie. But those who hope for a thoroughly entertaining, relaxed visit to the cinema, especially after the rather amusing beginning, will be put to a hard test of patience after the first 45 minutes at the latest. Therefore: Only worth seeing for viewers who want to deal with the serious topic of depression in an excellently played and authentically implemented way, absolutely worth seeing. For all others, who want to spend an enjoyable cinema evening, rather not suitable!