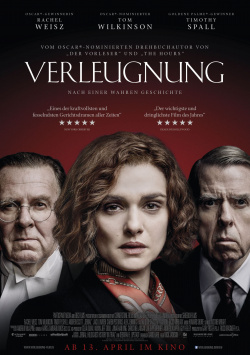 American university professor Deborah E. Lipstadt (Rachel Weisz) has long fought against the denial of the Holocaust. Now she of all people, the advocate of historical truths, is being sued in Great Britain by Holocaust denier David Irving (Timothy Spall) for slander. With her team of defenders around Richard Rampton (Tom Wilkinson), Lipstadt now faces an extremely delicate task: She must not only prove that she is right with her claim that Irving denies the Holocaust in his works. It must also be proved that these horrific murders of Jews by the Nazi regime actually took place. What should be a clear thing is proving to be an extremely difficult and delicate challenge, as a Rampton victory could have unspeakable consequences. And that must not happen under any circumstances…

"Denial" tells a true story that took place almost twenty years ago, but still couldn't be more topical. In times of "fake news" and populists who sell their views as truths, the cinematic adaptation of this process takes on a whole new, extremely important meaning. Director Mick Jackson and scriptwriter David Hare ("The Reader") show how important it is to take people like Irving out of the sails not with emotions, but with irrefutable facts. For the real Deborah E. Lipstadt, this approach to the process was extremely difficult, which makes Rachel Weisz very comprehensible in the film version.

The staging deserves credit for the fact that - apart from a few moments - it also largely dispenses with excessively emotional moments. The focus here is on objectivity and facts. The scenes from the negotiations then also stick closely to the real court protocols. Nevertheless - or perhaps because of it - the whole thing is not dry and too heady, but extremely stirring. As a viewer, you are often extremely angry about how a bad chapter like the Holocaust can be questioned at all and why a person like David Irving can be allowed to spread his inflammatory views.

The film, however, succeeds in making a very good distinction here, which makes it clear that this is a price we must be prepared to pay for our democracy - always ready to face lies and hatred with clear facts. As understandable as it may be that Lipstadt not only wanted to make their own position heard, but also to give a voice to the Holocaust survivors, the argumentation why exactly this would have been the wrong way to confront a person like David Irving is as plausible and important as it is.

"Denial" is an exciting, well played (hat off especially to Timothy Spall!) and very well written court drama, which has become an important movie not only because of its extreme topicality. His message is a very universal one that deserves to reach as large an audience as possible. Therefore there is a clear one from me: Absolutely worth seeing!