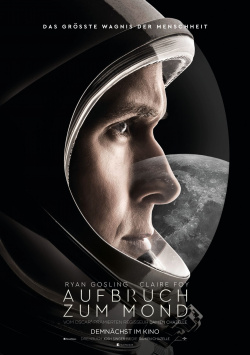 Departure to the Moon

After a family tragedy, pilot Neil Armstrong (Ryan Gosling) plunges into his work. Supported by his wife Janet (Claire Foy), he applies to participate in an astronaut program and is accepted against all expectations. This marks the beginning of the lengthy preparations for a mission Armstrong will go down in history with. A mission that also entails numerous conflicts, dangers and privations…

After the celebrated surprise success "La-La Land", director Damien Chazelle and leading actor Ryan Gosling have joined forces again to trace the story of the first moon landing in "Departure to the Moon". But not only NASA's space program is the focus of this drama, but also Neil Armstrong. Chazelle tries to trace as factually and authentically as possible the influence that work, the great challenges and dramatic setbacks have had on Armstrong and his family. The initial situation is highly emotional, as the couple is confronted with a tragedy right from the start, which is the worst nightmare ever for all parents.

In the space program the couple sees a chance for a new beginning, but Janet in particular becomes more and more aware that she could lose her husband. This not only offers a lot of dramaturgical conflict potential, but also the possibility to overwhelm the audience with big emotions. But this is exactly what Chazelle largely does without. This has many advantages, but also some disadvantages. The big advantage is that his movie almost manages without the usual pathos and never seems too intrusive. The downside is that despite strong actors and fascinating pictures he seems a bit undercooled and too sober. In the worst case this can lead to some moments seeming almost boring, which is really a pity in view of the high quality of the staging.

In the last half hour Chazelle pulls all registers. Although the outcome of the mission is known, there is a nerve-racking suspense that only dissipates when Armstrong sets foot on the moon and says his legendary sentence: "A small step for a man, but a big leap for mankind", followed by a moment that should actually move the audience to tears, but which is suppressed too much by the emotionally very reserved staging. It would also have been the perfect moment to finish the movie, but Chazelle adds a scene that remains absolutely true to his style and therefore is very consistent in its sobriety.

"Setting out for the Moon" is a good, sometimes even excellent film, which can inspire above all by the actors and the camera work. But in his effort to avoid kitsch and pathos, Damien Chazelle unfortunately overshoots the mark and therefore doesn't really manage to get his audience into the audience. The movie is definitely worth seeing, but only with small restrictions.