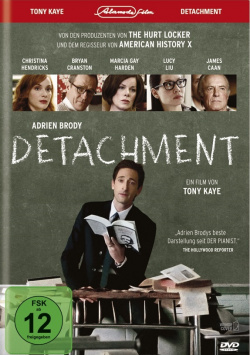 Film: Henry Barthes (Adrien Brody) has no easy job. He is a substitute teacher in New York and is always sent from one school to the next. He cannot build a real bond with the pupils in the short time in which he is responsible for them. At the same time, however, it also helps him to better bounce off their hostilities and insults. This is also the case in the class of a high school notorious for its problems, in which he is in the first lesson with a student against each other. But Henry can stay loose, in contrast to the teachers who have to work day after day with the rebellious, disrespectful and hopeless students. But the longer Henry observes the goings-on at this school, the more emotionally involved he becomes in the problems of the students and teachers. A chance encounter with the underage prostitute Erica (Sami Gayle) is then the last blow against Henry's emotional protective wall, which now finally collapses...

"Detachment" is extremely sheer fare, both in terms of his staging, and in terms of content. Director Tony Kaye ("American History X") mixes almost documentary-like realism with extremely artificial moments, in which animations are used as well. This is a little bulky, but in its very special way also very fascinating. Watching Henry's facade collapse more and more is absolutely thrilling just because of Adrien Brody's great performance. But also the other actors deliver something really great here. Whether Lucy Liu, who shines in the intense confrontation with a completely perspective- and listless pupil, a wonderful James Caan, "Breaking Bad" star Bryan Cranston or "Mad Men" Beauty Christina Hendricks, they all embody failed teachers whose ideals have been destroyed by a broken school system. And while younger teachers like Ms. Madison refuse to believe in what is good and that they can really shape the students, an old warhorse like Mr. Seaboldt has long since left this dream world and found his very own way to come to terms with the everyday burdens that the job entails.

Here and there the film may be a little too thick. Especially as far as the friendship between Henry and street girl Erica is concerned, a little less would undoubtedly have been more towards the end. But what Kaye really deserves to be credited with is that he doesn't romanticize the conditions he describes as much as he has done in much more brave school movies like "Dangerous Minds". In terms of realism, "Detachment" can best be compared to the French drama "The Class", whereby Kaye's film is even darker and more depressing and repeatedly hits the viewer in the pit of the stomach.

Now one might think that the film deals with a purely American problem. However, the grievances that have been pointed out in history no longer relate only to the school system in the USA. And that's exactly what makes "Detachment" a very important film for German viewers as well, which is worth discussing intensively. It's not a simple film, but a challenge that you have to be prepared to face. But the director's ambitions and the great performance of the great ensemble should be worth it to deal with this work. Anyone who likes challenging independent cinema from the USA, which repeatedly defies the rules of mainstream cinema, should not miss this anti-"Feel-Good-Movie". Absolutely worth seeing!

Picture + sound: Since only a data-reduced press sample was available for the test, unfortunately no rating can be given for the final picture and sound quality at this point.

Extras: Also the bonus material could not be viewed on the press DVD. Interviews and the trailer have been announced for the purchase variant.

Fazit: "Detachment" is an excellently cast drama that almost takes on documentary traits at times, only to be consciously artificial again. This is sometimes a bit bulky and exhausting. Moreover, the story itself has a rather depressing effect on the viewer. But at the same time director Tony Kaye has succeeded in creating a very intense movie, which has a long lasting effect just because of Adrien Brody's outstanding performance. Not an easy pleasure to watch, but those who are prepared for heavy fare and appreciate sophisticated independent cinema from the USA should not miss this work. absolutely recommendable]