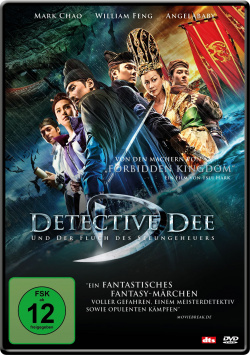 Detective Dee and the Curse of the Sea Monster - DVD

Contents: Even a legend like Dee Renjie once started small. Many years before his adventure around the phantom flames the then 30 year old Dee (Mark Chao) came to Luoyang, the city of the gods, to start his service here at the Da Lisi. But even before he is admitted to the service, he has to prevent the kidnapping of courtesan Yin Ruiji (Angelababy). He uses his idiosyncratic skills against Yuchi Zhenjin (Shaofeng Feng), the commander-in-chief of Da Lisi, and ends up in prison. But with the help of Doctor Shatuo (Lin Gengxin) he manages to escape. Now he can devote himself again to the investigation that leads him in an undreamt-of direction. Soon Yuchi, to whom the empress (Carina Lau) has given only little time to clear up the mysterious emergence of a sea monster, is forced to work together with Dee. Because the attempted kidnapping of Yin Ruiji and the mysterious monster seem to be part of a very big conspiracy that could threaten the entire realm of the Tang Dynasty...

After the great success of "Detective Dee and the Mystery of Phantom Flames" another cinematic adventure of the ingenious investigator for director Tsui Hark was quickly decided. Instead of Andy Lau this time Mark Chao plays the younger version of Dee Renjie. In a direct comparison, Chao doesn't do quite as well as Lau, who gave the investigator a little more dignity and elegance. Nevertheless, Chao does his job quite well overall. Nevertheless, he also can't prevent "Detective Dee and the Curse of the Sea Monster" from not being able to hold a candle to its predecessor.

Tsui Hark was able to squander a bit more budget this time, but this prequel is a bit more elaborate overall, so that the effects finally look a bit cheaper than in the first movie. In addition, the story with its various plot strands is too overloaded and with over two hours of running time also about 20 minutes too long. Detective Dee and the Curse of the Sea Monster" actually only achieves the high entertainment factor of its predecessor in the very well executed fighting sequences and in the brilliant finale. Although the movie defies all laws of logic, the exaggerated fantasy action is really a lot of fun. If Hark had trimmed some long-winded scenes and added more such fast-paced fun scenes, then this second Dee adventure would have been a real hit.

So the whole thing isn't a big hit, but still very entertaining popcorn cinema with a worth seeing equipment, some nice effects and thrilling fighting sequences. Whoever appreciates imaginative Hong Kong blockbusters and liked the first Detective Dee movie, will surely have a lot of fun here, too, despite some lengths. Worth seeing!

Picture + sound: From a purely technical point of view, the film on the DVD is completely convincing. Although many scenes take place in the dark, the sharpness of the pictures is consistently on a good level, in bright moments even on a very good level. Contrasts, black values and colour mixing also leave a positive overall impression. The sound mix transports the dialogues out of the speakers in an easily understandable way and especially during the fight scenes - especially during the grand finale - powerful movement comes into the surround range. Good!

Fazit: "Detective Dee und der Fluch des Seeungeheuers" is an entertaining prequel to the hit "Detective Dee und das Geheimnis der Phantomflammen" (Detective Dee and the Mystery of the Phantom Flames), whereby this appearance of the young Detective Dee can't quite hold a candle to its predecessor in terms of dramaturgy and tempo. The spectacular finale and some very good fighting sequences comfort some of the weaknesses and make the movie an entertaining fantasy adventure, which is presented on the DVD in good picture and sound quality. For lovers of Hong Kong blockbusters and Chinese fantasy tales highly recommended!