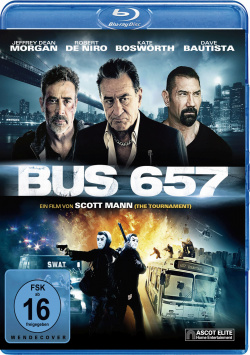 Film: Casino employee Vaughn (Jeffrey Dean Morgan) is desperate. He needs money for a life-saving operation for his little daughter. A lot of money. In his desperation he asks his boss Pope (Robert De Niro) for a loan. But Pope does not give alms - and even with a loyal employee like Vaughn he makes no exception. When he reacts angrily to the refusal, Pope throws him out without further ado. Now there seems to be only one chance left to save his daughter's life: Vaughn has to team up with his shady colleague Cox (Dave Bautista) and rob the casino. After all, a lot of money from illegal transactions is stored in the belly of the casino ship. Trying to snatch that under the nail seems like a surefire business. But of course everything that can go wrong goes wrong and soon Vaughn and his accomplices are on the run from Pope's trigger-happy henchmen and the police. And so they have only one way out: they have to hijack a public bus in the hope of getting out of this thing alive…

After the extremely bloody action-blaster "The Tournament", director Scott Mann now puts in "The Kidnapping of Bus 657" presents a somewhat more tame sequel, which starts as a classic Heist movie and then turns into an action movie in the style of "Speed" with set pieces from thriller dramas like "John Q."walks. Although the whole thing never reached the class of the obvious role models and was also quite obviously realized with a relatively small budget and therefore has a certain B-movie character, the movie still offers pleasantly entertaining entertainment and decent suspense.

Although the script doesn't put any award-winning dialogues in the actors' mouths, Jeffrey Dean Morgan and Robert De Niro are doing a good job. Although De Niro seems a bit bored at the beginning, especially since his character here is really not much more than a walking cliché. But if the casino boss is given a little more facets, this will also have a positive effect on the game of the two-time Oscar winner. The other actors don't exactly seem to be suspicious of prizes. Nevertheless, they all deliver solid performances, which can also cover up the dramaturgical weaknesses and logical holes.

Who isn't looking for more than solid action with some decent show values and some surprising plot twists, will be very well served here. Only those who can't overlook the lack of originality and the use of common clichés could get a little annoyed every now and then. But all in all there is more than deserved for this rapid hostage-taking: worth seeing!

image + sound: The image of the Blu-ray captivates by a decent image sharpness, which also lets many smaller details come to the fore very well. The colouring is very atmospheric, dirt or other visible weaknesses are not recognizable. The slight blur, which can be seen in the many dark scenes, is a deliberately used stylistic device to underline the slightly dirty look of the film.

The sound shows its strengths especially in the action sequences. In addition to the well mixed dialogues, sound effects such as shots, explosions or squeaky car tires provide powerful movement in the multi-channel area. Good!

Extras: In addition to eight interviews with the actors, the director and the screenwriter, the disc also features the trailer and a look behind the scenes (approx. 15:29 min.). Not really outstanding, but definitely worth seeing for interested viewers.

Fazit: "The kidnapping of Bus 657" is actually a typical direct-to-video production with a high B-movie flair. Nevertheless, the staging is just as convincing as the actors, who defy almost all script weaknesses. The result is an honest, entertaining and exciting thriller that doesn't revolutionize the genre, but can satisfy its target audience. The Blu-ray presents the film in good to very good picture and sound quality. Only the bonus material is a little bit too insignificant. But the bottom line is that this is enough for an absolutely satisfied one: Recommendable!