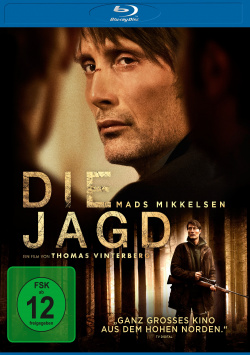 Film: After many setbacks Lucas (Mads Mikkelsen) seems to have finally found some luck in his life again. After he had lost his job as a teacher because his school was closed and his marriage had fallen apart, the 40-year-old is really flourishing in his new job as a kindergarten teacher. Moreover, feelings seem to develop between him and the temp Nadja (Alexandra Rapaport), which could lead to a serious relationship. Good reasons, therefore, to look to the future with a positive outlook. But then Lucas is accused of having sexually harassed little Klara (Annika Wedderkopp), the daughter of his best friend Theo (Thomas Bo Larsen). A lie that's spreading at a frightening rate in this small town. Even before Lucas can defend himself in any way, he is convicted by his colleagues, his neighbours and his friends. Every clear indication of his innocence is ignored and the community falls into a state of collective hysteria, which inexorably approaches a catastrophe...

With "Die Jagd" Thomas Vinterberg ("The Festival") has staged an incredibly oppressive drama, which grabs the audience after a few minutes and only loosens the firm grip towards the end, only to strike once more. Vinterberg succeeds in making the despair and helplessness, but also the rage Lucas feels, really palpable. At no time does he trivialise the subject of child abuse. The film makes it clear how important it is to investigate such suspicions. At the same time, however, it also becomes clear in a shattering way what the consequences of misunderstood care can be and how much mistakes, for example in questioning children, can destroy the life of an innocent person.

The fact that Lucas does not even have the opportunity to defend himself for a moment makes him so angry. Because in itself the lie of the child could have been uncovered very quickly. And the fact that the adults no longer believe the girl when she herself says that Lucas did nothing and they literally persuade the frightened child that Lucas, so popular with the children, is a sexual criminal, intensifies the feeling of total helplessness many times over. People's hatred of Lucas would be understandable if his guilt had been clearly proven. But a small lie reveals the darkest sides of the people, which can never be closed again - even if peace can be restored superficially.

Alongside Vinterberg's great production, it is especially the strong play of Mads Mikkelsen, who is always reliable for such an achievement, that makes this film such an intense experience. Mikkelsen more than credibly embodies a man who tries with all his strength to restore his reputation and save his face and who simply does not want to give up believing in the good in man and in a victory of justice, however much the other inhabitants of his place convince him of the opposite. Mikkelsen's game refrains from exaggerated outbursts of emotion, but lives from a restraint that makes the viewer fear that at some point it will explode in an extremely drastic way. Especially the supposed calm, which is also reflected in the pacing of the production, increases the tension to such an extent that even after the end of the movie it's hard to completely free yourself from it for a long time.

"Die Jagd" isn't easy entertainment, but an extremely difficult movie to bear. But it is precisely this intense effect that makes the drama one of the most impressive and certainly the best films of the 2013 cinema year. If you like demanding and challenging dramas and would like to feel the emotional power of the art form film again, you shouldn't miss this great work. Absolutely worth seeing!

Picture + sound: The sometimes very warm colouring of the film, which is very well implemented on the Blu-Ray, pretends to the viewer an idyll that quickly gives way to pure anger and helplessness in the course of the story. The image sharpness is on a good to very good level and the coordination of contrasts and black values also ensure a consistently positive impression of the visual implementation. The tone present in DTS-HD 5.1 provides a very atmospheric sound backdrop, although reserved due to the calm staging. Good!

Extras: The additional material is clear, but worth seeing. We offer interviews with Mads Mikkelsen (ca. 5:26 min.) and director Thomas Vinterberg (ca. 8:02 min.), whereas the conversation with Vinterberg has much more information to offer than the usual promo lobbies. In addition to these interviews, there are five edited scenes (about 13 minutes) in which a longer sequence with Theo and the alternative ending stand out. The alternative ending was only changed in one nuance, but it's much clearer, more closed and also harder than the quite open ending of the finished movie. The trailer and further program tips of the offerer round the bonus material off.

Fazit: "The hunt" is a cinematic blow into the stomach pit, which moves, enthrals, excites and inspires with an extremely shocking and effective production, great actors and a haunting story. A strong film that is one of the sustainable highlights of the 2013 film year. The Blu-Ray of the drama is technically well realized, the bonus material is quantitatively lean, but qualitatively convincing. absolutely recommendable]