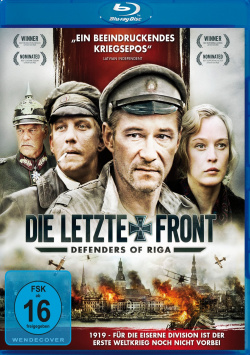 Content: Martin (Janis Reinis) fought for Latvia's independence for five years during the First World War. The goal seems to have been reached and so Martin returns to Riga, hoping to be able to tie in with his great love Elza (Elita Klavina) where he left years ago shortly before the planned wedding. But Elza is hostile and convinced that Martin doesn't really love her, because all his passion is the fight for freedom in Latvia. The young soldier has hardly any opportunity to convince his beloved of the opposite. For the German general von der Goltz did not accept the end of the war and does not want to give up Latvia. With the help of the Russian officer Bermondt (Grits Krumnis) the general wants to implement a war trick through which the Iron Division takes the side of the Russian West Army to take Riga. And so in November 1919 there is a decisive battle in which Martin and the other men of the resistance seemingly lost hopelessly to the overpowering enemy...

"The Last Front - Defenders of Riga" has quickly become the most successful film of all time in Latvia. No wonder, since the struggle for the country's independence is told in an extremely powerful way and above all with an especially large portion of patriotism and pathos. What has promoted the success of war films in Latvia could, however, be seen as a point of criticism in other countries. This hymn to the heroism of the freedom fighters leads to a very one-dimensional character drawing, whereby the figure of the Russian officer Bermondt is almost made a joke, while Martin is the radiant, introverted hero. Here, the movie simply lacks corners and edges and it's hard to build up a real bond to the characters in view of such a simple knitted figure drawing.

Also the inevitable love story doesn't necessarily contribute to the movie's success. The fact that Elza still sulks like a little girl even in the face of the greatest dangers because she hasn't heard from Martin for so long simply takes away the romance in the long run from her initially quite existing fire. But even though the movie has to fight its way through clichés and dramatic ballast, the end result is absolutely worth seeing. Because only the visual implementation can convince all along the line. This applies to the sets as well as the uniforms, the equipment and the effects. But also good cuts, through which game scenes are linked with archive footage, underline the very good impression left by the visual language.

And as soon as it comes to the fight for Riga, the tension also takes on very captivating proportions. Even if the shaky hand camera optics are a bit annoying, the viewer is drawn into the action very well and even if the outcome of the fight might be known to most viewers, one feverishes with the courageous resistance fighters until the end. "The Last Front - Defenders of Riga" may not be perfect, but what director Aigars Grauba and his team have put together for a relatively small budget is something to be proud of. If you can overlook the usual clichés and the pathos, which is a bit thickly applied just towards the end, and if you value war dramas that are convincing in their craftsmanship, you should give this movie a chance. Worth seeing!

Picture + sound: The picture shows some clearly exaggerated contrasts, whereby the happening appears sometimes a little too bright. The sharpness of the image also suffers a little, but can still be convincing by and large. Especially with outdoor shots, the visual implementation leaves a very positive overall impression. The sound convinces with some powerful and very vividly implemented surround moments, which especially in the last third of the film ensure a good utilization of the multichannel area. Good!

Fazit: "Die letzte Front - Defenders of Riga" is a very elaborately produced war movie, which has advanced to the most successful movie of all time in Latvia. Even though the dramaturgy with the obligatory love story is quite clichéd and the staging doesn't spare any pathos, the fight of the resistance movement for Riga is implemented excitingly enough to be able to recommend the movie to those viewers who are interested in the genre!