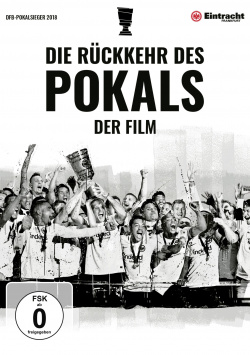 Film: But this was also a cinematic event when the players of Eintracht Frankfurt brought the DFB Cup back to Frankfurt in May 2018. Thousands of fans cheered along the route from the airport to the Römerberg, where a whole sea of other fans waited to celebrate the victory together. From this event, "The Return of the Cup - The Film" has emerged, which in 89 minutes impressively shows the inner life around the DFB Cup victory in May 2018.

The stirring documentary film offers fans exclusive insights into the inner life of the team before, during and after the final as well as interviews in which the protagonists report on this historic weekend. This is not only interesting, but also emotionally stirring. You can also see pictures of Rebic's inimitable goals and Gacinovic's unforgettable solo run, accompanied by the original commentary. That provides with many fans guaranteed once again for a genuine goose bumps.

The whole came about, since a film team was allowed to accompany the team from the departure on Thursday to the end of the celebrations on the Roman on Sunday approximately around the DFB cup weekend. When it was clear that this historic victory was to be documented for a film, interviews were subsequently conducted with coaches, players and officials. The result is a film that impressively illustrates the inner life of Eintracht and conveys the dedication and passion with which all participants worked for a successful finale. For fans a really great look behind the scenes and a rousing reminder of a truly special day! Especially those who were there themselves will regard "The Return of the Cup - The Film" as a very special work.

In the cinema, the documentary film developed into a real surprise success. Again and again, additional performances had to be scheduled, which were quickly sold out. Now you can experience the whole thing again and again at home. So, put DVD or Blu-ray into the player and experience this sporting event once again, where not only one city, but an entire region was excited about! Not only for Eintracht fans an absolute must!

Picture + Sound: The picture quality of the DVD is on a very good level for a current documentation. The interview sequences in particular convince with their high image sharpness and harmonious contrasts. But also the recordings of the game or the victory celebration present themselves without recognizable weaknesses. The Dolby Digital 5.1 mix is rather cautious in the interviews, but also gives a good surround feeling in other scenes. Good!

Extras: Fans may be pleased, because the DVD has still numerous worth seeing extras to offer. There are numerous additional clips, such as a compilation of all goals in the final game (approx. 2:50 min.), impressions of the Eintracht games to fan chants of "Im Herzen von Europa" (approx. 2:56 min.), the team line-up at the final (approx. 1:16 min.), as well as joyful Eintracht players singing in the bus or also on the Roman balcony (approx. 4:42 min.). A few amusing outtakes follow (approx. 1:10 min.), as well as a whole lot of additional interview sequences (approx. 73 min.). Here fans get to see even more statements from Kevin-Prince Boateng, Marco Russ, Danny De Costa, Fredi Bobic or Peter Fischer.

Thus not enough: More clips show lucky fans who got tickets for the finals at a ticket campaign (approx. 2:05 min.), rousing recordings of the Public Viewing in the Commerzbank Arena (approx. 3:03 min.), a Best of Finale (approx. 2:44 min.), as well as recordings of the cinema premiere in Frankfurt (approx. 4:31 min.). But there is also a bittersweet moment: The return of the trophy (ca. 3:56 min.), followed by a final thank you to the fans (ca. 1:44 min.). Of course the trailer for the film must not be missing either.

Fazit: "The Return of the Cup - The Film" was a real surprise success in the cinema. Now fans can experience one of the very special moments in the club history of Frankfurter Eintracht again and again at home cinema. The DVD presents the stirring documentary film in good picture and sound quality and also offers numerous extra sequences in the bonus material. Especially for fans: Absolutely recommended!