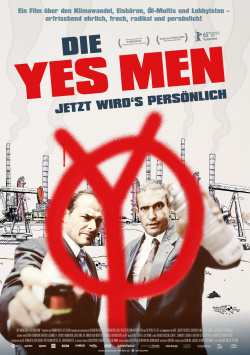 Andy Bichlbaum and Mike Bonnano are celebrated and feared as activist duo Yes Men. Their actions are provocative, revealing and usually very effective in the media. They have made the machinations of corporations public, pilloried lobby groups and governments and have always tried to wake up the media and the people and inspire them to protest. But despite some successes and a lot of attention, after 15 years it seems that the Yes Men have not really made a difference. So is it time to retire, take more care of the family, a relationship or the actual jobs? The two men are tempted to do exactly that - if there were not climate change and the disastrous climate policy of the international community. The imminent climate summit would be perfect for a new action. But this time it must be something particularly spectacular, whereby the responsible persons of this world are finally shaken awake and moved to rethink...

"Die Yes Men - Jetzt wird's persönlich" (The Yes Men - Now it gets personal) is the perfect conclusion for the "Yes Men" trilogy, which already has two award-winning contributions: "The Yes Men" (2003) and "The Yes Men Rule the World" (2009). For the third part, filmmaker Laura Nix accompanied the two protagonists for several years, not only observing some of their actions, but also gaining a very honest insight into the private lives of the two activists. This is what makes this film so different from its two predecessors, where the two actually hid completely behind their artificial figures and pseudonyms. Here, the viewer doesn't only get to know their real names, but also gets to know their families and what they earn their money with in real life.

This may sound like the film is only a portrait of the two men, which might only be of limited interest for a wider audience. Far from it: by showing who is behind the Yes Men and what effects their commitment has on their private lives, the importance of their actions is further emphasized. It becomes clear that there is much more behind her appearance as a Yes Men than slipping into second-hand suits and impersonating government representatives or representatives of large corporations.

Besides the very private insights, climate change is the second big topic of the film. The facts the viewer learns here about the impending - or already occurred - changes and about the inactivity of politics and industry are actually extremely frustrating and discouraging. The great strength of this documentary is that it manages to be informative on the one hand, entertaining and amusing on the other. The result is a film that shows how important the commitment of each individual is, even when you have the feeling of fighting against windmills. A funny, charming, informative documentary, that makes you angry, but at the end also spreads a little bit of hope in a really wonderful sequence. You just have to say YES to these men. Absolutely worth seeing!