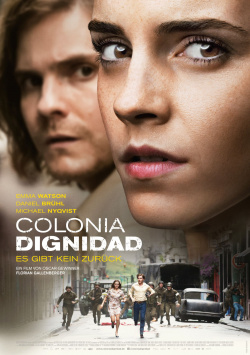 Chile in September 1973: The young stewardess Lena (Emma Watson) actually wanted to use her stay in Santiago to spend some romantic hours with her boyfriend Daniel (Daniel Brühl), who lives here as a photographer. But the city is in a state of turmoil as General Pinochet takes power against President Salvador Allende. When Daniel tries to document the events with his camera, he and Lena are arrested. Although Lena is released after a few hours, Daniel is taken to an unknown place. His desperate girlfriend tries everything to find out where he was taken. But she only finds deaf ears. Only at Amnesty International she learns that Daniel was probably taken to Colonia Dignidad, a German sect in southern Chile. The sect is said to be in close contact with the Secret Service. So Lena can't expect any help from the embassy. So she has only one choice: she has to sneak into the Colonia Dignidad and free Daniel herself. But this puts her own life at risk…

One might hardly believe that "Colonia Dignidad" is actually based on true backgrounds. The story about Lena and Daniel is pure fiction. But the hermetically sealed camp about 300 kilometres south of Santiago de Chile, where the German lay preacher Paul Schäfer (depicted in the film by Michael Nyqvist) exercised his horror army for almost four decades, really existed. It was founded in 1961 under the guise of a charitable association for Chile's rural population, before it became an enormous economic power and was finally used by Pinochet's secret service as a torture camp and production site for weapons and poison gas. Schäfer's connection to Pinochet's secret service, but also to the German government, could probably lead to several feature-length films and documentaries. But director Florian Gallenberger ("John Rabe") used the shocking conditions in the camp more as a horrifying backdrop for a much more intimate, yet enormously gripping thriller drama.

Thereby he managed to establish a threatening basic atmosphere throughout the film, through which even the quieter scenes have a lot of suspense. In its best moments, the thriller is stirring and disturbing, makes you angry and makes you extremely feverish with the two main characters. And in the end, if you don't already have some previous knowledge, you want to learn more about how much reality there is in the events shown here in Colonia Dignidad. In any case, Gallenberger was very concerned about authenticity. Not only did he travel to the camp in Chile, but he also spoke to some of Schäfer's former followers. In addition, his outfitters and set designers did a great job in bringing the early 1970s to the screen in a credible manner.

The actors also perform very well. Michael Nyqvist plays the cult leader with an almost frightening mixture of intensity, arrogance and emotional indifference. Emma Watson has not only matured into a young woman, but now also into a serious actress. And Daniel Brühl can once again prove here why international filmmakers are also flocking for him. The strong actors and the gripping atmosphere can't prevent that there are some small lengths in the middle part of the movie. But all in all, "Colonia Dignidad" is a really strong thriller, whose backgrounds you will think about long after the credits are over. And there is a deserved one for that: Absolutely worth seeing!