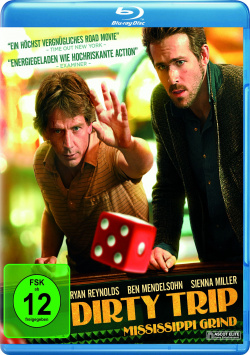 Film: Gerry (Ben Mendelsohn) is a loser, as he says in the book: He is addicted to gambling, constantly broke, highly indebted and lives separated from his wife and little daughter. Whenever he wins a few dollars, a short time later he loses three times that amount again. But that should be over now. Gerry dreams of being able to pay off his debts at a poker game in New Orleans. Maybe then he can build a relationship with his daughter. But to participate in the tournament, he needs $25,000. A lost cause - until Gerry meets the charming Curtis (Ryan Reynolds). The wanderer seems to bring Gerry luck, because in his presence he makes one profit after the other. And so the two men embark on a joint journey along the Mississippi to New Orleans, to the end of their personal rainbow. But it doesn't take long for Gerry to seriously wonder whether his dream of happiness isn't just an illusion…

"Dirty Trip" is a stirring character study about a gambling addict who desperately holds on to the hope that after a great victory he will have the chance of a new life, which he won't gamble again. The problem with player films in general is that the focus is usually on broken, unappealing characters. That is also the case here. Gerry may not be a bad guy at heart. But his addiction to gambling always reveals very unpleasant character traits. As a viewer it's generally hard to give such characters the sympathy they need to be captivated by the story.

Luckily, lead actor Ben Mendelsohn ("Slow West", "The Dark Knight Rises") manages very well to give Gerry enough facets that make him a very interesting character despite his many negative traits. In contrast to Mark Wahlberg's player in "The Gambler", whose tendency to self-destruction kept the viewer emotionally at a distance, Gerry shows enough sympathetic sides especially in his interaction with Curtis, but also in a scene with his ex-wife, so that you actually wish him to make the jump and become a good father to his daughter. But also Ryan Reynolds delivers a really good performance. Little by little he reveals the façade of the carefree man of life, revealing a very multi-layered character that Reynolds embodies with convincing restraint.

But the secret star of the film is the American Southern Province, captured here in a very Hollywood-untypical way. The America shown by the directing duo Anna Boden and Ryan Fleck seems unembellished, authentic and therefore extremely engaging. The images immerse the film in a very special atmosphere, which is a stirring counterweight to the very carried narrative flow. In combination with a light pinch of humor, this prevents the viewer from getting bored. If you generally like American independent cinema and can get involved with the somewhat unwieldy narrative style and the characters, which aren't easy to grasp, you'll get a very well played and vividly staged entertainment of a more demanding kind. Clearly one: Worth seeing!

Picture + sound: The technical implementation of the Blu-Ray is on a pleasantly high level. The image sharpness is very good and allows even small details and textures to come to the fore. The colour scheme looks very warm and natural and the balance of black levels and contrasts also support the positive overall impression of the image quality. The same can be said for the sound. Although there is no big fireworks of effects due to the genre, the surround channels are still repeatedly stressed by atmospheric ambient noises and smaller sound effects, which results in an overall very harmonious sound carpet. Very good!

Fazit: "Dirty Trip" is a stirring portrait of a run-down player who sees a new acquaintance as an opportunity to finally walk the winning path of life and start over again. Played excellently by Ben Mendelsohn and Ryan Reynolds, the movie primarily captivates with quiet character moments, which are slow, but never boringly staged. If you like quieter character studies with some slight humorous insertions, you shouldn't miss this road trip of a different kind. The Blu-ray is technically convincing, but the bonus material is a little poor. All in all, however, it is clearly enough for one: Recommendable!