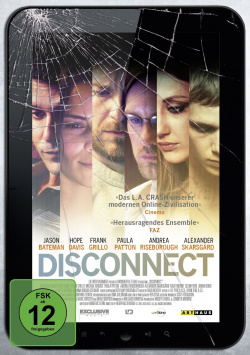 Film: Is global networking through the Internet a curse or a blessing? How dangerous are social networks? Do they promote real contacts or do they rather lead to general loneliness? The award-winning documentary filmmaker Henry-Alex Rubin deals with these and other very complex questions around the Internet in his first feature film "Disconnect". The film tells in seemingly disjointed narrative strands about the family of lawyer Rich (Jason Bateman), who is so caught up in his job that he has forgotten every form of normal communication with his wife (Hope Davis) and their children Ben (Jonah Bobo) and Abby (Haley Ramm). So he doesn't even notice that Ben is constantly bullied by his classmates. Especially Jason (Colin Ford), son of an ex-cop (Frank Grillo) has his eye on the loner. Together with a buddy he gets a cruel idea, which is supposed to be just a little prank, but which will have fatal consequences...

Really happy are Derek (Alexander Skårsgard) and Cindy (Paula Patton) since the death of their child no longer. While Derek completely closes himself off and takes refuge in online poker games, Cindy seeks support for her grief in an online support group. When they become victims of credit card fraud and thus slide towards financial ruin, the alienated couple decides to jointly take the right into their own hands. Television journalist Nina Dunham (Andrea Riseborough) also wants to stand up for the law when she meets young Kyle (Max Thieriot) in a porn chat, who works as a stripper in front of his webcam. For Nina this is just a good story at first. As she gets to know Kyle better, she wants to help him to a better life - but her career ambitions always get in her way...

As so many things on the internet these single fates are more closely connected than it seems at first. Rubin skillfully weaves the individual storylines into a stirring whole that moves very slowly but inexorably towards its dramatic climax. With an outstanding cast, the spherical music of Max Richter and a very cleverly constructed screenplay, the director manages excellently to create a charged atmosphere that establishes a consistently high tension despite the very quiet production. It's stirring, it's angry, and it's a little scary. And even if a little too much sentimentality comes into play at the last moments, the viewer is very moved at the end and feels the certainty of having seen not only a very good film but also an important one.

Due though in "Disconnect", as in many other films that are told episodically, the use of different storylines is at the expense of the narrative depth of the individual stories, the overall construct never seems superficial. And this is enormously important compared to the very topical and important topic of the film. Superficiality would have been enormously annoying here. However, Rubin avoids this cliff with absolute sovereignty, which is why his movie can also live up to his high ambitions in the end. Surely, the production has to struggle with a few smaller lengths and is also not completely free of well-known clichés. But since the drama deals with topics that can also affect every single viewer, one is so captivated by the networked events that such small weak points hardly attract negative attention.

"Disconnect" shows outstandingly the far-reaching consequences that carelessness can have on the Internet, how important it is not only to enjoy the advantages of the virtual world, but also to be aware of its dangers. When one sees how easily existences can be destroyed and unstable souls tormented, this is extremely depressing, especially with the awareness that this is unfortunately an everyday reality. It's a feeling that doesn't let you go as a spectator so quickly. Thus the film stimulates reflection and discussion and at the same time offers exciting and thrilling entertainment. Anyone who likes somewhat more demanding ensemble dramas should not miss this work. Absolutely worth seeing!

Picture + sound: While the sound, as usual in quieter dramas, is primarily determined by the dialogues and the thrilling music, the very clean picture of the DVD pleases with an atmospheric colouring and a good sharpness of detail, which hardly loses any quality even in darker scenes. Good!

Fazit: "Disconnect" is a stirring drama that inspires reflection and discussion, but at the same time offers exciting entertainment. Carried by a convincing cast of actors, this episodically staged film is a clear must for all lovers of more demanding dramas. The DVD is technically well done, the bonus material is a bit superficial, but at times quite interesting. All in all, there is one for it: absolutely recommended!