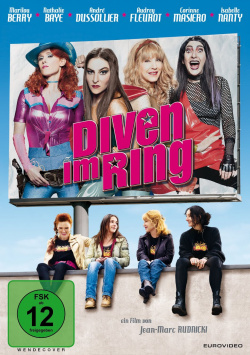 Divas in the Ring - DVD

Film: Rose (Marilou Berry) is desperate: After five years in prison, her relationship with her son Mickaël (Hugo Fernandes) is almost completely destroyed. For the boy, the woman is a stranger who occasionally visits him with his foster family. That's all. Rose wants to change that at any cost. Since her son is interested in nothing more than wrestling, she decides to become a catcher herself. The ex-wrestler Richard (André Dussollier) should help her. He is taken with the talent and the iron will of the desperate mother, but has to give her a bad news: alone she has no chance in the business. She needs a team to compete with. But Rose does not allow herself to be dissuaded from her plan either. Without further ado, she inspires her bored colleagues in the supermarket to join her. And so with Colette (Nathalie Baye), Jessica (Audrey Fleurot) and Viviane (Corinne Masiero) the "divas in the ring" were born. But is this really the right way for Rose to get closer to her alienated son again?

With his feature film debut "Diven im Ring" director Jean-Marc Rudnicki skilfully manages the balancing act between light entertainment, strong female comedy and social drama. He weaves the different aspects into a harmonious, entertaining whole, whose gags fortunately only rarely drift into exaggerated silliness. Charmingly drawn characters, brought to life by great actresses, further intensify the pleasure of this unusual story. The attempt of some frustrated supermarket employees to try their hand at wrestling could easily have degenerated into a silly clown. However, Rudnicki takes his characters and their motivation seriously and thus creates a credible and comprehensible basis for a story that you can call weird.

Straight at the beginning the pacing is also convincing. Only a few minutes pass before Rose decides to step into the ring for her son and accept Richard's help. But it doesn't take more time to teach the most important basics. Now there is enough space for the figures to develop, so that they can grow closer to the heart of the audience. Admittedly, in the second half of the movie some dramaturgical lengths come up and the accusation that it is quite predictable has to be put up with, despite its original basic idea. But altogether these negative aspects weigh only very little and affect therefore hardly on the positive general impression.

Who likes French comedies like ?welcome in the Bretagne? and has a weakness for charming woman films without the usual romantic stereotypes, the ?divas in the ring? should not be missed in any case. Worth seeing!!

Picture + sound: The image of the DVD pleases with its warm, ingratiating colors and a good overall sharpness, which makes even smaller details stand out in the brighter scenes. As usual with comedies, no surround fireworks should be expected when it comes to sound. However, the Dolby Digital 5.1 Mix always fulfils its purpose of transporting the dialogues and the soundtrack out of the speakers in a well coordinated and powerful way. Good!

Fazit: "Diven im Ring" is like "Willkommen in der Bretagne" a successful mixture of entertaining women's film and charming social comedy. With a restrained humor that only seldom drifts into silliness and with charming main actresses the movie manages to easily balance a certain predictability of the story. The DVD presents the lovable comedy in an appealing audiovisual version. Bonus material, however, is not sought in vain. Nevertheless this is enough for an absolutely convinced one: Recommended!