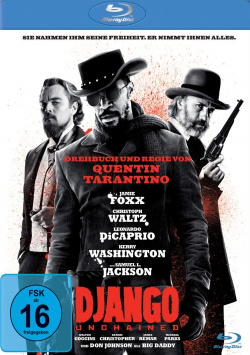 Film: When Quentin Tarantino brought his Grindhouse homage "Death Proof" to the cinemas in 2007, some critics were already saying that he had already reached the zenith of his success and was only a weak copy of himself. But already two years later the eccentric filmmaker punished all his critics with "Inglourious Basterds" lies, because he created a work which inspired fans and critics alike and was awarded with more than 70 film prizes. A success that many were sure Tarantino would not be able to repeat so quickly. But the director surprised again and delivered with his newest movie "Django Unchained" a little masterpiece, which is his most successful movie so far.

And this has its reason, as Tarantino once again manages to illuminate a serious background with an enormously high entertainment value and at the same time tell a really good story. At the centre of the story, set in the southern states of the USA two years before the outbreak of the American civil war, is the slave Django (Jamie Foxx). He gets a tempting offer from the German bounty hunter Dr. King Schultz (Christoph Waltz): since Djagno knows what the murderous Brittle brothers Schultz is currently hunting look like, he is supposed to help the bounty hunter track them down. If he succeeds, Schultz will give him freedom. The cooperation of the unequal men is indeed successful and after a bloody confrontation with the Brittle brothers Schultz keeps his promise. But instead of going his own way now, Django gets involved in a new deal. Since Schultz has realized that they are unbeatable as a duo, he asks the now free slave to help him in the hunt for outlaws. In return, he will help Django free his wife Broomhilda (Kerry Washington) from the hands of unscrupulous plantation owner Clavin Candie (Leonardo DiCaprio). It is the beginning of an unusual friendship that threatens to end in a very great bloodbath...

1966 Franco Nero had made the figure of Django the absolute cult and epitome of the spaghetti western. Many films used the name "Django" for pure marketing reasons, without the character even appearing in them. But despite the over-inflationary use of the name, nothing changed the cult character of Django, who had also fascinated Quentin Tarantino for a long time. For more than ten years he has been working on bringing his very own spaghetti western to the cinemas. And if you know Tarantino, you know that no classic Western could come out of it.

Due in his latest film, Tarantino again masterfully mixes the genres, telling the story of a slave in best Western manner, filled with blood, humor and wonderful dialogue scenes. The fact that Tarantino is a very big movie lover is not only noticeable in "Django Unchained" by the fact that he primarily focuses on classic effects and renounces CGI games or the currently so popular 3D optics. He also uses locations that make every Western fan's heart beat faster with joy and quotes directly or indirectly from various classics of different genres. And also the music plays a very central role again, whereby at first glance there seems to be no clear line in the selection of the pieces. In addition to classical soundtrack sounds (Ennio Morricone), Tarantino also spices up his film with 70s folk (Jim Croce), modern soul (John Legend) and contemporary hip hop (RZA). But what looks like a very strange mixture actually works first class. Tarantino knows like hardly any other how to find the perfect musical background for every scene. And that, like the whole film, has to be versatile and a little crazy.

But what works even better than the music and the excellent camera work is the interaction of actors and script. Tarantino has written a great script that brilliantly brings his perfectly chosen actors to life. Christoph Waltz, who received his second Oscar for this role, does a particularly wonderful job. That there is a very special bond between Tarantino and the Austrian can be felt in almost every moment of the film in which King Schultz can be seen. The manner in which Waltz Tarantino's words are put into practice is a real revelation that alone is worth every cent of the entrance fee. But not only Christoph Waltz, also his co-stars deliver here only first-class. Jamie Foxx, for example, gives Django an engaging blend of anger, despair and coolness. "Miami Vice"-Beau Don Johnson is as good a racist landowner as Samuel L. Jackson, who has aged very well by the make-up artists. But the big acting highlight of the film is Leonardo DiCaprio next to Christoph Waltz. As a greasy Calvin Candie with yellow teeth and a violent temper DiCaprio is simply mercilessly good. The fact that there was no Oscar nomination for it is a real shame, as this achievement would have been the perfect opportunity to finally honour DiCaprio's talent with the long overdue Oscar.

Often long dialogue scenes are not exactly the strongest moments of a film and can also contribute to the creation of unpleasant lengths. Tarantion's Death Proof is a perfect example. But here it looks quite different. Even though there is some action, which also has a very high entertainment value due to its completely exaggerated brutality, the long dialogues are the quality of the movie. Because it doesn't get really exciting when the air gets leaded, but when the protagonists duel with their words. The big highlight is a dinner at Candie's, where Waltz as well as DiCaprio are in top acting form.

Humor, which is never flat, but in its best moments extremely biting (a scene with completely stupid Ku-Klux-Klan members is undoubtedly the highlight here), wonderful dialogues, first-class actors and a perfect symbiosis of pictures and music make "Django Unchained", despite its stately running time, an extremely entertaining, amusing but also exciting film, which certainly belongs to Tarantino's best works. A very big cinema highlight 2013, which should not be missing in any good home cinema collection. Not only for Western and Tarantino fans absolutely recommendable!!!

Picture + sound: From a technical point of view the Blu-Ray implementation can be completely convincing. The excellent image sharpness allows many small details of the wonderful equipment and the costumes to come into their own, the film blood splashes very powerfully across the screen thanks to the good coloring and also the contrasts and the black values were implemented very well. The DTS-HD Master Audio Mix provides a very atmospheric sound background, which spreads a great surround feeling especially in the leaded finale. Very good!

Extras: When it comes to bonus material the Blu-Ray is a bit disappointing. Only three short documentaries and two promos are offered to the viewer here. In addition to an insight into the work of costume designer Sharen Davis (approx. 12 min.) and horse and stunt trainer (approx. 14 min.), there is also a homage to set designer J. Michael Riva (approx. 13 min.), who died during the shooting, in which the last interview with Marlene Dietrich's grandson can also be seen. These short documentaries are all interesting and worth seeing, but for a movie like this, about the creation of which there is certainly much more worth knowing to learn, just 40 minutes of bonus are just too little. It's also noticeable that there's hardly anything to hear and see from Quentin Tarantino himself, which leaves a strange aftertaste in the featurette about J. Michael Riva.

Fazit: "Django Unchained" is Quentin Tarantino's most commercially successful film to date, which has also won two Oscars, two Golden Globes and many other awards - and quite rightly so. Wonderful dialogues, great actors and fantastic pictures make this homage to the spaghetti westerns a great pleasure, which also works extremely well in home cinema. This disc is despite the rather weak additional equipment an absolute must!