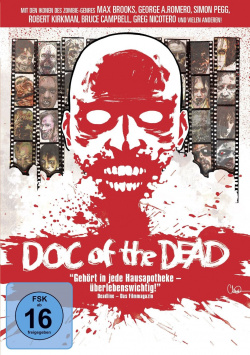 Doc of the Dead - Blu-ray

Film: Everywhere the undead are currently coming out of their graves in order to frighten their inclined audience in films, TV series, books, video games or comics. But where does this zombie boom come from? To whom do we owe the image of the classic zombie? And what is more fearsome - the slowly shuffling or the running zombies? Alexandre O. Philippe explores these and many other questions about zombies in his entertaining documentary "Doc of the Dead". He was able to secure the help of numerous experts. George A. Romero, the "Godfather of Zombies", "Walking Dead" inventor Robert Kirkman, "Shaun of the Dead" star Simon Pegg and also "World War Z" author Max Brooks are all featured in front of the camera, accompanied by numerous film excerpts and their own contributions shot for this documentary.

"Doc of the Dead" also poses essential questions - such as whether the traditionally slow shuffling zombies are more fearsome than the modern running undead. There is also advice on how best to behave in a zombie apocalypse, where author Max Brooks has very special ideas. And one learns that there are indeed people who earn their money by selling survival packages for a zombie apocalypse.

With a lot of humor and self-irony, the entire zombie genre and all its excrescences are scrutinized here. Passionate fans who put on make-up for hours for zombie walks all over the world and amateur filmmakers should not be missing. However, one of the most beautiful stories "Evil Dead"-star Bruce Campbell has to tell about a very special wedding, in which he took on a really unusual role.

"Doc of the Dead" is a very likeable and absolutely worth seeing documentary, that especially for horror freaks has some very amusing, but also really interesting moments to offer. A must for all who love the genre but don't take it too seriously. Those who rather expect a factual documentation conveying only facts will be disappointed. Absolutely worth seeing!

Picture + sound: The picture quality depends on the displayed source material. In the interview sequences the image sharpness is on a very high level and there is nothing to complain about in terms of colours and contrasts. In the case of archive recordings, on the other hand, it is possible that there may be minor soiling or blurring. Overall, however, the picture quality leaves just as good an impression as the original English sound, which transports the voices of all interviewees out of the loudspeakers powerfully and comprehensibly. Good!

Extras: Bonus material has the disc not to offer.

Fazit: "Doc of the Dead" is the perfect documentary to accompany the current zombie boom. When zombie experts like cult director George A. Romero, "Walking Dead" inventor Robert Kirkman or "Shaun of the Dead" star Simon Pegg ponder about the undead, review their cinematic history or think about how best to behave in a zombie apocalypse, this is simply a lot of fun for interested genre fans. The fact that the Blu-ray doesn't have any extras to offer apart from the rather short main movie is only of marginal negative importance due to the high entertainment value of the documentary. Absolutely recommended!