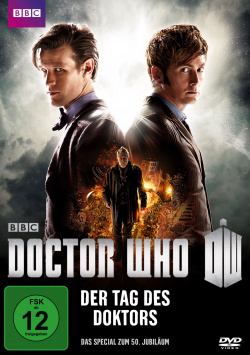 Content: Fifty years already the Doctor travels in different incarnations through space and time to save the universe from all sorts of villains and from total destruction. Fifty years of cult, which since 2005 has spread more and more across the borders of Great Britain. And so the anniversary could not only be celebrated by fans in England, but also in other countries like the USA or Germany at the same time, not only on TV, but also in selected cinemas. Of course, it was clear that the creators had put all their efforts into satisfying the many old and new fans not only dramaturgically, but also visually. And so "Doctor's Day" is the first "Doctor Who" episode to be filmed in a pretty 3D setting.

In terms of special effects, a lot has also been achieved, which works very well not only in 3D, but also in the 2D version. The story takes place on three levels of action and time, which are brought together in the last third. The eleventh Doctor (Matt Smith) not only meets his predecessor (David Tennant), but also an incarnation of himself, which he could not remember until now. For this new incarnation the creators could win the legendary character actor John Hurt ("Alien").

The plot and the many surprises it has to offer shall not be revealed too much at this point. Perhaps just this much: the story, set in 2013 in the cellars of London's National Gallery, in 1562 in Elizabethan England and in a distant galaxy, not only offers plenty of suspense and humour, but also tries to bridge the gap between the past and future of the series. Author Steven Moffat ("Sherlock") dares to tackle a basic myth of the series and with his change sets the course for many new possibilities for the future of "Doctor Who". It's true that fans who have been with the Time Lord for many years and who haven't just been part of their loyal following since the reboot in 2005 may be disturbed by this turn of events in the series canon. And one must not attach too much importance to 100% logic in the overall context. But even if the whole thing looks a bit badly constructed, Moffat has to be credited for having managed to bow to the legacy of the previous series and at the same time to initiate something new.

This very special episode doesn't only live from the numerous references to the "Doctor Who"-history or from the good effects. Rather, it is the harmonious chemistry between the three Doctor incarnations that meets here. Especially Matt Smith and his predecessor David Tennant have some very wonderful scenes together, which you can hardly miss as a fan. While these are humorous in the first place and clearly increase the fun factor, the jubilee episode also has a number of goose bumps to offer, with these clearly gaining the upper hand towards the end.

"The Doctor's Day" is a real gift to all "Doctor Who" fans. Even though not everyone can be satisfied and not all elements of the episode work equally well, the makers must be allowed to do justice to the 50 years of history of the cult series. And for that there is also a more than deserved one: Absolutely worth seeing!!

Picture + sound: Technically there is no reason to complain. The episode filmed in 3D also has real cinema quality in places in the 2D version. The picture is absolutely clean, the sharpness of detail is on a high level and the colours are very powerful. The sound is a pleasantly dynamic Dolby Digital 5.1 mix, which always offers really good surround effects, but at the same time transports the dialogues out of the speakers in a way that is easy to understand. Very good!

Extras: The bonus material of the DVD is absolutely satisfactory. It starts with two mini episodes that work towards the anniversary sequence. While this isn't quite so obvious with "The last Day" (ca. 3:43 min.), it becomes very clear with "The Night of the Doctor" (ca. 6:50 min.) with the small appearance of one of the main actors from "Der Tag des Doktors". These mini episodes are followed by a short, but very beautiful and worth seeing look behind the scenes of the anniversary episode (approx. 13:08 min.), as well as two good trailers. But the best extra is the documentation "Doctor Who Explained" (ca. 44:49 min.), which offers beginners a good overview of the Who universe. Absolutely worth seeing!

Fazit: "The Doctor's Day" is - at least from the point of view of a fan of the new edition from 2005 - a more than worthy anniversary episode, which on the one hand tries to pay tribute to the last fifty years and all previous incarnations of the Doctor, but at the same time also lays the foundation for changes and a new future for the cult series. Larded with numerous allusions, some of which will only be revealed to hardcore fans, and staged in a humorous and exciting way, this episode is simply a lot of fun and also has some real goose bumps. The DVD presents the anniversary in very good picture and sound quality and also has some interesting and informative extras to offer. absolutely recommendable]