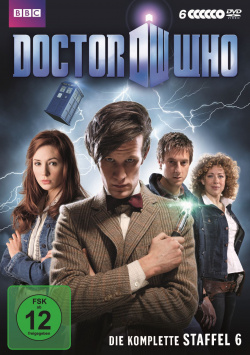 Content: The Doctor is back! The cult series "Doctor Who", which has been an integral part of British pop culture since 1963, is enjoying steadily increasing popularity outside the United Kingdom following its successful revival in 2005. Also in Germany the fan community of the Time Lords is growing, who has been impersonated by Matt Smith since season 5 after the farewell of David Tennant. While he also took his hat with the big Christmas Special 2013 and will be replaced by Peter Capaldi from season 8 on, we have the second year of Smith as Doctor Who on DVD. And that's really something. In these thirteen episodes of the sixth season, the Time Lord (Matt Smith) and his companions Amy Pond (Karen Gillan) and Rory meet old enemies like the Cybermen, new enemies like Silence and faithful companions like Craig (James Corden), where the Doctor lived as a lodger in a great Season 5 episode. And of course River Song (Alex Kingston) also appears again, who will play a very important role in this season and will be a big surprise.

After the very nice Christmas special with Michael "Dumbledore" Gambon and the singer Katherine Jenkins, in which a very special variation of the popular Christmas story by Charles Dickens is told, it starts immediately with a particularly dramatic moment into the sixth season: when Amy and Rory meet River Song at a lake in Utah, the three have to watch the Doctor being killed by an astronaut rising out of the lake. When they meet a younger version of the Doctor shortly thereafter, they realize that they can still prevent his death. But first they have to find out who the mysterious astronaut is. In search of answers, they meet a new enemy: Silence. These are beings with telepathic powers, which are immediately forgotten as soon as they disappear from view. But they are not the only danger threatening the Doctor and his companions in their new adventures. On a pirate ship, a siren-like creature causes fear and terror, there are dangerous doppelgangers and a hotel in which the inmates are confronted with their worst fears. The Cybermen also return, this time sending little spies, the so-called Cybermats, to prepare an attack. And finally they meet one of the biggest monsters of all: Adolf Hitler!

But above everything hovers the impending death of the Doctor, who seems to be inevitable. And of all people Amy's child, who is born on a space station, seems to play a key role. Including the Christmas special, Season 6 features fourteen episodes that once again feature the proven mix of action, adventure, fantasy, science fiction, romance, mystery, suspense, drama and lots of humor. In the episode "Night of Fear" a good portion of horror is added. It's this colourful mix that makes the concept of the series work so well even after fifty years. Admittedly, not every episode is a direct hit. There are some lengths and a few action elements that only work conditionally or not at all. And yet the series is a lot of fun even in the weaker moments. This is due to the actors as well as to the sometimes very playful staging, which reveals that they work with a lot of enthusiasm and love for the genre.

With silence, the Who universe was extended by a new, very effective threat, which is even more fearsome than the crying angels, which were also only conceived after the restart. Even though these Doctor's opponents will never reach the cult status of the Daleks or the Cybermen, they are a real enrichment for the series. The exciting full season arc, new opponents, old acquaintances and guest stars like Hugh Bonneville from Downton Abbey are many of the good reasons why fans shouldn't miss this season. Absolutely recommendable!

Picture + sound: This box is also convincing in the technical area: The picture is clean, you won't find any disturbances or dirt here. Very powerful colours, a good overall sharpness and tidy contrasts underline the positive impression that the visual implementation leaves behind. The sound presented in Dolby Digital 5.1 is a well-balanced mix of dialogues, music and effects, the latter being responsible for the pleasantly audible movement in the surround range. Good!

Extras: This season box also has a lot of interesting bonus material to offer. It starts with a very nice booklet, which introduces the single episodes, but also deals with the history of the series and introduces new and old acquaintances of the Doctor, who appear in the six episodes.

DVD 5 is the disc with the fewest extras. There are only two Confidentials for Episode 10 (ca. 11:09 min.) and Episode 11 (ca. 9:07 min.). The last DVD has more bonus material to offer. We start here with a very good audio commentary on the last episode with Steven Moffat, director Jeremy Webb and actress Frances Barber. In addition there are two Confidentials for Episode 12 (ca. 12:46 min.) and 13 (ca. 8:59 min.), as well as a monster file about the Cybermats (ca. 10:15 min.). In addition there are five parts of the short film series "Night and the Doctor" (approx. 15 min. in total), which also gets its own Confidential (approx. 15:12 min.). A prequel clip for episode 13 (approx. 1:13 min.) and two trailers (approx. 2 min.) round off this once again great additional offer.

Fazit: The sixth season of "Doctor Who" actually offers everything that makes the Who fan's heart beat faster. There is a very dramatic storyline spanning the season, lots of new worlds, lots of old acquaintances, humor, suspense, SciFi and some more surprises. And even though not every episode is a real highlight, there are only very few sagging episodes in this season. The DVD box is also again equipped with several hours of worthwhile bonus material, which is not only informative, but first and foremost extremely entertaining. And once again it shows that the "Doctor Who" boxes are really exemplary TV releases. And that's what we're admitting here again: absolutely recommended!