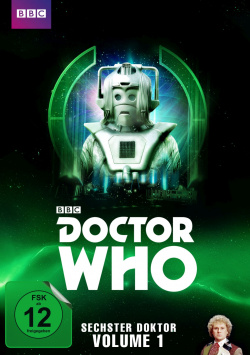 Content: Fans of "Doctor Who" were not badly surprised when the fifth Doctor Peter Davidson did not turn up at the end of the 21st week. The team was not only able to say goodbye to the sixth squadron, but was also able to regenerate itself into the sixth Doctor Colin Baker during the current squadron. His portrayal of the legendary Time Lord took some getting used to, because suddenly the doctor was extremely arrogant and condescending. But that is not all of the changes. With the end of the 21st season the makers said goodbye (for a short time) to the usual broadcasting format of 25-minute episodes. Instead of telling the individual stories in four episodes each, season 22 was limited to two 45-minute episodes each. In addition, the basic tone of the series became a little darker, which the very colorful outfit of the new doctor could change little.

Although not everyone was able to make friends with this new interpretation of the cult figure and especially the fact that Baker's doctor for the first time also used physical violence against his opponents, pushed some people up badly, this changed little about the popularity of the series. Behind the scenes, however, there were some discussions about this new direction of the series, which finally led to an unusually long production break and the surprisingly fast end for Colin Baker after only eleven adventures as a doctor. And yet Season 22 has everything to offer that has given "Doctor Who" cult status, which is still unbroken today: fascinating opponents, fantastic stories and a good dash of dry humour.

The first four-part "Twice Einstein" is the weakest story in the first DVD set of the sixth Doctor. The trashy effects, which are especially noticeable in the design of the nasty snail creatures the doctor has to deal with, are somehow part of the series. And to a certain extent, they also add to the charm of the series. However, the story of the power-hungry Mestor, who wants to spread his species throughout the galaxy in order to take control of the universe, is simply not very entertaining. Boredom reigns here rather than excitement and really good entertainment. This changes, of course, with the first two-parter of season 22, where there is a reunion with the Cybermen, who are still called Kybermänner in the German version. The doctor and his companion Perpugilliam "Peri" Brown (Nicola Bryant) must prevent here no less than the end of the world by Halley's comet. The next story continues to be exciting, which can certainly be seen as a critique of the reality TV format - and thus still shows a certain topicality. The last two-part of this set then brings the return of the master, the archrival of the doctor, who has joined forces with the nasty Time Lady Rani. The doctor in 19th century England must fight against them.

No question, all four stories have very good moments, amusing scenes and convincing acting performances. But it is also not to be denied that such fans, who only got to know and love "Doctor Who" with the much more elaborate and technically better produced Reboot 2005, might have problems with the rubber monsters, the trashy backdrops and the 80's outfits, which take some getting used to. But if you can get involved with it, you will quickly be captivated by the very special charm of this series, which has made "Doctor Who" such a popular cult phenomenon for over 50 years now. And fans can't avoid buying this box just because of the great bonus material. Therefore there is again a clear one: Worth seeing!

Picture + sound: An audiovisual revelation should not be expected for a 30 year old TV production. The picture in the classic 4:3 TV format shows a harmonious colour scheme, but also shows some blurriness and slight picture noise. The sound is present in a rather unspectacular stereo mix, which nevertheless transports the dialogues out of the speakers in a very powerful and understandable way. The sound effects, on the other hand, seem a bit powerless and too centrally mixed. Nevertheless: for a quite old TV series the end result is still absolutely satisfactory.

Extras: Also this box is exemplary again in terms of bonus material and has all kinds of newly produced extras as well as archive material on offer, which makes the purchase indispensable for fans. We start with very entertaining audio comments on all episodes with actors and crew. These are thoroughly entertaining and informative comments, which do not conceal production problems or qualitative weaknesses of the individual episodes. Unfortunately there are no subtitles to these comments. A good command of English is therefore a must here. You should also have that for the really good info subtitle track, where all kinds of interesting and hidden details about the respective episodes are revealed.

Besides the comments and the subtitle track there are also numerous video extras. We start here on the first DVD with "Der Mann von den Sternen" (approx. 6:05 min.), an interview with the designer of the title sequence. In "Hundred Years Younger" (ca. 11:47 min.) Colin Baker has an amusing conversation with comedian Amy Lamé about the doctor's different outfits. Then there is a detailed look into the comics of the series (approx. 17:47 min.), followed by archive interviews from British breakfast television (approx. 9:55 min.) and a popular children's programme (approx. 10:03 min.). Finally there are some program announcements (about 3:14 min.), a picture gallery and two easter Eggs, one of which was produced exclusively for the German fans.

For most DVD boxes this would be an end. But this is where it really starts. DVD 2 starts with "The Cold War" (ca. 27:29 min.), a retrospective documentary about the origin of the episode "Attack of the Kybermen". Their story will be further explained in a documentary (ca. 22:52 min.). The following is an interesting interview with the British professor Kevin Warwick, a specialist in cybernetics (ca. 8:11 min.). Picture galleries, a trailer (approx. 3:13 min.), an Easter Egg and the possibility to watch the episode with an isolated soundtrack track complete the bonus material on DVD 2.

On the third DVD there are no extras apart from the audio commentary on the episode "Revolt on Varos". The bonus material for this episode is on the fourth DVD. Also here there is an interesting documentation about the origin of the episode (ca. 29:40 min.). Afterwards it is examined how "Doctor Who" himself dealt with the medium television within the series (approx. 7:32 min.). Cut and extended scenes (approx. 17:44 min.) to the episode follow, followed by recordings of the studio shoot (approx. 4:42 min.) and outtakes. There is also the acid bath scene with alternative music (approx. 1:38 min.). After some program announcements (about 1 min.) Sarah Sutton, the companion of the fourth and fifth doctor, explains how Colin Baker's account of the Time Lord was received in the press (about 12:56 min.). There are some more news extracts (about 1:10 min.), appearances on breakfast television (about 5:44 min.), as well as a popular call-in show (about 15:08 min.). And finally, as a delicacy, a rare, not broadcast "Doctor Who" sketch from the cult comedy series "French & Saunders" (approx. 7:34 min.).

The last DVD also has some additional material on offer. After a worth seeing look back at the origin of the episode (ca. 43:20 min.) follows a comparison of the locations then and today (ca. 4:07 min.). Some deleted scenes (ca. 8:40 min.), an interview with the composer Jonathan Gibbs (ca. 9:44 min.) and further TV appearances in the Call-in Show (ca. 2:04 min.) and the children's show Blue Peter (ca. 11:23 min.), as well as a picture gallery and an Easter Egg complete the really extensive bonus material perfectly. It doesn't get any better!

Result: The sixth incarnation of "Doctor Who" in the mid-1980s caused many controversies. While Colin Baker's outfits were brightly colored, his doctor's psyche was dark and unbalanced. There was also criticism of the unusual brutality with which this doctor acted against his adversaries. That didn't change the success of the series much, but it eventually led to a longer production break and the rather fast end for Baker after only eleven stories. "Whovians" can now enjoy his first four adventures, which are released in a box full to bursting with great bonus material. Even though these old episodes may seem trashy at times, fans can't get past this box. absolutely recommended!