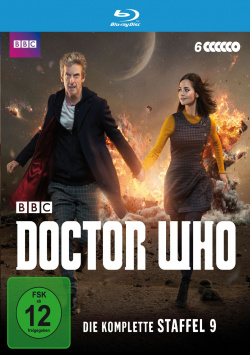 Content: The Doctor (Peter Capaldi) and his companion Clara Oswald (Jenna Coleman) are back for new adventures, once again saving different worlds or even the entire universe from destruction. Whether the sky is frozen, whether the doctor has to go into the heart of the Dalek Empire, whether they have to deal with ghosts in an underwater station or whether the earth is threatened by the zygons, a dangerous people of shape-shifters - together the doctor and Clara always find a way out of even the most dangerous situations. But in a mysterious street in the middle of London, of all places, the two meet a deadly challenge that they don't seem to be up to. And so it's time to say goodbye… only to whom?

When 56 year old Scot Peter Capaldi was hired as twelfth Time Lord at the end of the seventh season, scepticism was great, especially among the fans of his predecessor Matt Smith. It soon became clear that Capaldi's doctor would be very different from his younger predecessors. And his relationship with Clara is also developing on a different level from that of the eleventh doctor. It took some getting used to at the beginning, but it developed very well in the ninth season. The doctor may be a bit grumpier and cynical, but that only makes him more interesting as a character. And Clara has now finally learned to deal with these new pages of the Time Lord and has become a more than equal companion for him.

Naturally the two meet some old acquaintances in the new episodes as well. After all, you want to offer the fans what they want to see. A season without Daleks would be unimaginable. Nevertheless, the makers around Steven Moffat also tried to try something new here and there. For example, there is one episode with a found-footage look, while another episode is almost entirely carried by Peter Capaldi alone. An experiment with some lengths, but one of the most interesting episodes of the season. In general, it can be said about the quality of the season that, as so often with "Doctor Who", it varies from episode to episode, sometimes very clearly. Although the creators try for variety and merge SciFi with horror, comedy or classic adventure stories, there are simply some stories that don't work as well as others. And in some places it becomes clear that after all these years the series simply repeats itself and doesn't have much new to offer.

Nevertheless: Season 9 of the new "Doctor Who" series proves once again that the cult series still fascinates, entertains and surprises even after more than 50 years and has its own charm that no other series has been able to copy so far. Even though there are not only highlights and the double episodes are a little long, the doctor's adventures are still a lot of fun. And even if the end of the season leaves a bittersweet impression - why, of course, is not revealed here - one is already looking forward to season 10, with which Peter Capaldi supposedly wants to say goodbye to this role. But until then, you can enjoy this great relay box, which clearly deserves an "absolutely worth seeing".

picture + sound: Technically there is no reason to complain about the implementation of the new episodes for the Blu-ray. The picture is absolutely clean, the sharpness of detail is on a high level and the colours are very powerful. For a TV series, that's really excellent. The sound is a pleasantly dynamic DTS-HD 5.1 mix, which always offers really good, powerful surround effects, but at the same time transports the dialogues out of the speakers in a way that is easy to understand. But there is a very clear one: Very good!

Extras: With the bonus material, the creators have put in a lot of effort like with the earlier relay boxes. So besides some audio comments fans are offered about 5 hours of really worth seeing extras. We start on the first disc, where beside trailers and a cut scene (ca. 0:43 min.) there is a review of season 8 (ca. 3:41 min.), a prequel to season 9 (ca. 6:22 min.) and a prologue to the first episode (ca. 1:57 min.). In addition there is a detailed interview by Will Weaton ("Star Trek: Next Generation", "Big Bang Theory") with the two main actors (ca. 42:11 min.), a look behind the scenes of the first two episodes (ca. 5:55 min.), as well as a featurette about the Daleks (ca. 5:56 min.). And that's just the beginning.

Fazit: "Doctor Who" is after more than 50 years still cult and extremely successful. Although the latest season isn't one of the best the series has to offer, it's a lot of fun due to some really good ideas and the harmonious chemistry between Peter Capaldi's doctor and Jenna Coleman's Clara. The Blu-ray Box presents the episodes in very good picture and sound quality and also has lots of worth seeing extras to offer. But there is a very clear one: Absolutely recommendable!