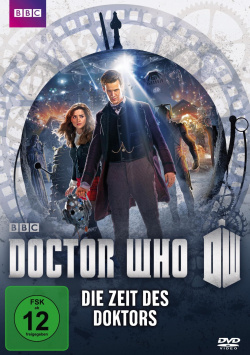 Doctor Who - The doctor's time - DVD

Content: The universe is once again in danger! This time it is a mysterious signal that has lured all the dangerous species of the universe, from the Daleks to the Cybermen, into orbit around the planet Trenzalore. Together with his companion Clara Oswald (Jenna Coleman) the doctor (Matt Smith) has to find out what is so special about the sleepy little planet and who is responsible for the mysterious signal. But when he realizes that the fate of the planet is closely linked to his own, he must make a serious decision that could mean his final death - for he is actually the last of all incarnations of the Time Lord...

Mit "The Time of the Doctor", the "Doctor Who" Christmas special from 2013, Matt Smith says goodbye to his fans. And the eleventh doctor, of course, doesn't take his hat quietly, but rather drives a true spectacle up again, in which he is confronted with all his great enemies such as the Daleks or the Cybermen. After several incarnations of the doctor and his various companions, fans of the series might be accustomed to changes. Nevertheless, saying goodbye to a beloved doctor is always associated with a little melancholy. After the excellent David Tennant, many doubted whether Matt Smith would really be able to fill these great footsteps. But his doctor quickly conquered the hearts of the fan community and gave the series a further boost in popularity.

After the big climax, the episode to the 50th anniversary of the series, "The Doctor's Time" of course seems much smaller and more unspectacular. Also, Smith's farewell was not quite as emotional as David Tennant's somewhat protracted departure at the time. But apart from that, this special Christmas special has become an absolutely successful episode that actually unites all the elements that fans love about this cult series into one entertaining whole. There is suspense and humor, action and emotion, good special effects and traditional designs and of course there are the powerful opponents. What do you want more?

The contrast between the events on and around Trenzalore and the Christmas dinner with Clara's family is simply wonderfully funny and provides a humorous contrast to the rather sad finale. All in all, "The Doctor's Time" is a worthy farewell for a wonderful doctor who has given the fans some great episodes and made the Fès a real cult headgear. At the same time, the episode is also the starting shot for the new Doctor Peter Capaldi, who in the few seconds he can be seen here, manages to give the popular cult figure a completely new character of his own. It will be interesting to see how the series will develop with him as the twelfth doctor. Altogether there is a very clear one for this special: Absolutely worth seeing!

Picture + sound: Technically there is no reason to complain about the realization of the episode for the DVD. The picture is absolutely clean, the sharpness of detail is on a high level and the colours are very powerful. The sound is a pleasantly dynamic Dolby Digital 5.1 mix, which always offers really good surround effects, but at the same time transports the dialogues out of the speakers in a way that is easy to understand. But there is a very clear one: Very good!

Extras: The DVD has almost 100 minutes of bonus material to offer. It starts with a worth seeing look behind the scenes of the Christmas special (ca. 12:46 min.), followed by a journey in the Tardis through the story of "Doctor Who" (ca. 43:03 min.), where some former actors of the doctor also get a say. Finally, a documentary on Matt Smith's farewell once again reviews his time as Time Lord (ca. 43:32 min.). Absolutely worth seeing!

Result: Mit "The Time of the Doctor", the "Doctor Who" Christmas special from 2013, Matt Smith says goodbye to his fans. And the eleventh doctor, of course, doesn't take his hat quietly, but rather drives a true spectacle up again, in which he is confronted with all his great enemies such as the Daleks or the Cybermen. The finale of the episode is not quite as emotional as the farewell to his predecessor David Tennant, but Smith always makes a worthy exit. Fans of the series should not only buy the disc because of the episode, but also because of the almost 100 minutes of bonus material. Absolutely recommendable!