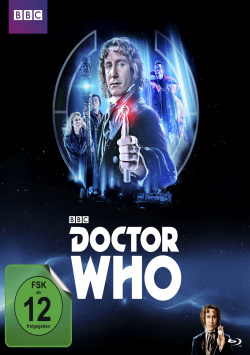 Doctor Who - The movie - Blu-ray

Film: Doctor Who is cult! Not only in Great Britain, where the Time Lord has now been seen in various incarnations for 53 years. His adventures have been followed with constant enthusiasm for generations. In Germany or America, on the other hand, the doctor was completely unknown until a few years ago. This changed slowly with the revival of the series in 2005 after a break of almost 16 years. With a mixture of old charm, modern effects, a lot of humour, tension and tempo, the series became a cult abroad with the appearance of David Tennant as the tenth doctor. Although the series in Germany is still far away from the success in its home country or the USA, it is still a long way to go. But here, too, there has long been a loyal fan community that is happy about every new adventure of the doctor.

So it is a great pleasure that fans in this country are also given the opportunity to get to know the phenomenon "Doctor Who" in all its facets. After several releases of earlier episodes before the revival of the series, the TV film, made during the 16 year break, now appears. In this unique guest performance of the eighth doctor Paul McGann the "Master" is apparently destroyed. Now it is the task of the doctor (Sylvester McCoy) to bring the mortal remains of his archenemy back to his home planet Gallifrey. But during the mission there are complications and the TARDIS has to make an emergency landing on Earth in 1999. Here the doctor is not only shot down by a street gang shortly after his arrival. The master also succeeds in seizing a new body (Eric Roberts). With the help of the doctor Grace Holloway (Daphne Ashbrook), the doctor in his new incarnation (Paul McGann) must now try to find the Master and stop his diabolical plan, which could not only threaten the entire human race…

The story behind this TV film is much more interesting than this attempt to keep a myth alive. The British-American co-production is a product of its time in every respect. Especially with the special effects, which were very obviously created in the wake of what James Cameron presented with "Terminator 2" and "The Abyss" in the area of digital effects. The adventures of the Time Lord should therefore appear more modern and appeal to a new audience. But unfortunately this also lost a lot of charm, which is why the experiment failed in the end.

There are many reasons why the "Doctor Who" TV movie couldn't really be called a success. But there are just as many reasons why it is so much fun because of its high trash factor. Even though at first glance the typical "Doctor Who"-feeling might be missing, the movie and just one of the main actors has a lot of what made the earlier incarnations of the Doctor so popular. Paul McGann is a little over-excited, but he still sums up the essence of the Time Lord very well. Eric Roberts plays wonderfully exaggerated, which is really great fun in some scenes. And the story itself is so abstruse that it makes you extremely entertained.

If the TV movie shows one, then "Doctor Who" cannot be Americanized. The series is a thoroughly British product, which is why some of the scenes in the movie seem to be really hard work and just don't want to work out. Nevertheless, this short guest performance by Paul McGann as Doctor is entertaining and a must for fans of the series anyway!

Picture + sound: In a 21-year-old TV production you should expect some small weaknesses. But they keep within pleasant bounds here. The picture in the classic 4:3 TV format shows a harmonious colouring and a good picture sharpness, but also shows some small dirt and especially in the dark scenes a slight picture noise. The sound is in a rather unspectacular DTS-HD Master Audio 2.0 mix, which nevertheless transports the dialogues very powerfully and comprehensibly from the loudspeakers. The sound effects on the other hand, at least in the German version, seem a little powerless and too centrally mixed. Nevertheless: for a very old TV movie the end result is still absolutely satisfying.

Extras: The film may not be one of the highlights of the series. Nevertheless, the purchase of the disc is worth it just because of the great bonus material. There are two very good audio comments to the main movie. The first one was recorded by director Geoffrey Sax, who has some interesting anecdotes to tell about the making - even if it comes to longer breaks in the narrative flow every now and then. The second commentary unites the seventh Doctor Sylvester McCoy with the eighth Doctor Paul McGann. This lively conversation will be moderated by Nicholas Briggs.

Besides the two comments there are also a lot of video extras. We start with an Easter Egg recorded especially for the German release, which is relatively easy to find. An info text about the film, isolated pieces of music, special effects clips and trailers are part of the standard program. But really worth seeing are the featurettes. We start here with an entertaining conversation titled "Des Doktors seltsame Liebe" (The Doctor's Strange Love) (ca. 17:13 min.) The authors Joe Lidster and Simon Guerrier chat here with the comedian Josie Long about her love for the film, as well as about all its strengths and weaknesses. "The Doctor's Night" (ca. 6:51 min.) is a mini episode on the occasion of the 50th anniversary of the series, in which Paul McGann was once again allowed to slip into this unique role. Absolutely interesting is the documentary "Die siebenjährige Unterbrechung" (approx. 53:55 min.), in which the difficult path from the last season to the film is traced in detail. In addition to clips of Paul McGann's audition (7:40 min.), advertising material from the Electronic Press Kit for the film (approx. 15:25 min.) and footage from the shooting (approx. 4:49 min.), the viewer also gets a short tour of the TARDIS (approx. 2:36 min.), two alternative takes (approx. 1:06 min.) and BBC trailer donated.

We continue with a special edition of the British children's programme Blue Peter about the important relationship between the show and "Doctor Who" (ca. 26:46 min.). The focus will be on the years 1989 to 2009. Another documentary shows how fans could sweeten the dry spell with novels, magazines or comics until their comeback in 2005 (approx. 23:33 min.). The comics will then be dealt with in more detail in another featurette (approx. 19:49 min.). And finally, a brief look is taken at how the film was received in the British news (approx. 10:51 min.). In addition there is a beautifully designed booklet! For fans there is really a lot on offer!

Fazit: "Doctor Who" is cult - and not only since the successful revival in 2005. Already since 1963 the doctor inspires his fans in different incarnations. But there was actually a time when the end of the series seemed to come. It was precisely at this stage that the TV film appeared, which was intended to mark the short guest appearance of Paul McGann as the eighth doctor. The Blu-ray presents this fantasy adventure in good picture and sound quality. However, the real selling point are once again the outstanding extras, which not only take a look behind the scenes of the movie, but also offer a deep insight into this chapter of the myth "Doctor Who". And there is a deserved one for that: Absolutely recommendable!