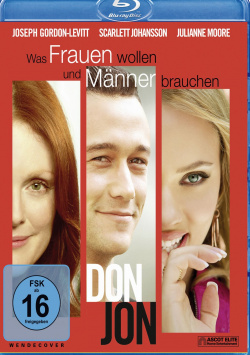 The fact that actors also try their hand at directing is nothing new. Dustin Hoffman, James Franco, Natalie Portman or Anthony Hopkins, she and many of her colleagues have succumbed to the charm of standing not only in front of the camera, but also behind it. That can succeed, but it can also go terribly in the pants. Now Joseph Gordon-Levitt has also decided to broaden his artistic horizon and to act not only as the main actor in his new film, but also as a scriptwriter and director. And assuming that it's after five short films and his feature film debut as a filmmaker, the result is more than respectable.

Don Jon's direction looks very unerring and self-confident. And that is absolutely necessary with such a topic. Because too easily a film about a man who is addicted to Internet pornography could have degenerated into a dirty farce. But even though Gordon-Levitt lets his dialogues come across here and there as rather crude, he always finds the right tone to make more of his debut than a flat sex comedy. Rather, he has succeeded in creating an extremely amusing, but especially in the second half surprisingly profound portrait of a young man who, trapped in a cycle of modern macho culture, sensory overload through modern media and exaggerated egomania, seems to have lost every ability for real feelings.

If Jon seems very superficial and one-dimensional at the beginning, Gordon-Levitt manages with his pointed game to give this character an undreamt-of depth in the course of the story and above all an extremely high sympathy value. He is supported by some great co-stars. Scarlett Johansson is a great manipulative bimbo. How she degrades the actually so self-confident Jon to a will-less puppy is simply wonderfully played. Julianne Moore, a lonely fellow student with a sad past, is the absolute opposite of the lascivious Barbara. It's not just in Jon's life that she looks like a foreign body at first. The character also doesn't really want to fit into the story at first, until it becomes clear that this is exactly what makes her a key figure for Jon's life and for the whole movie.

"Don Jon" actually has everything that good cinema entertainment needs. He is funny and clever, convinces with his engaging camera work and fast editing, he is well played and just makes you feel good. Sure, the film isn't perfect, but for a directorial debut it's damn close. For lovers of somewhat more demanding American independent comedies absolutely worth seeing!

image + sound: The Blu-ray image is absolutely clean and pleasing with its warm, powerful color scheme. The contrasts are well balanced, which means that even in darker scenes there is hardly any loss of quality in the overall sharpness. The DTS-HD 5.1 MA Mix brings the dialogues, the Voice Over commentary and the soundtrack powerfully to the fore, whereby the events take place primarily in the frontal area. Real surround feeling only comes up occasionally, which isn't uncommon for a movie of this genre and therefore doesn't attract much negative attention. Overall, there is for picture and sound of the Blu-ray a more than satisfied. Good!

Extras: The disc has some nice extras to offer, some of them exclusive to Blu-ray. Also included on DVD are the short Making of (ca. 6:44 min.), as well as the featurettes about the themes of the film (ca. 5:38 min.), about the origins of the story (ca. 7:19 min.), about the multiple burden as main actor, author and director (ca. 4:49 min.) and about the superficiality with which Jon sees his life (ca. 5:06 min.). The trailer and other program tips of the provider are also included on both media.

On Blu-ray only there is a short promo clip about the story (approx. 2:22 min.) as well as five short clips that Joseph Gordon-Levitt recorded for his production company HitRecord Films about "Don Jon" (approx. 13 min.). Also included is an excerpt from a press conference on the film in New York (approx. 5:09 min.), as well as the press conference at the Berlinale 2013 (approx. 38:04 min.) on the disc. An alternative trailer and teaser are also part of the exclusive BD range. Gut!

Fazit: "Don Jon" is the successful directorial debut of Joseph Gordon-Levitt, who also cuts a really good figure as the leading actor in this amusing independent comedy. Story, editing, music and the well-chosen cast help the film to get over even the smallest stumbling blocks. Thus, the whole thing is, at the bottom line, an extremely enjoyable affair, which, despite all the fun on the surface, also tells a really nice, deeper story. The Blu-ray presents the film in good picture and sound quality and also has some worth seeing extras to offer. Recommended!