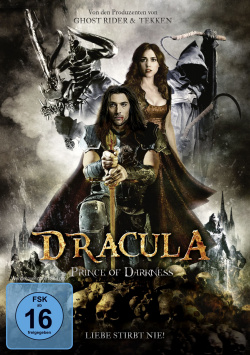 Content: It is the year 1453: While the young Romanian prince Dracula (Luke Roberts) tries to defend his empire from the Turks, his adversaries try to ascend the throne. Dracula's great love Elizabeth is killed. The prince swears eternal revenge. Centuries later, as an undead vampire, he still causes fear and terror in the forests of Transylvania. When he meets the young crusader Alina (Kelly Wenham), he thinks he recognizes his Elizabeth in her. And so there is only one goal left for him: he kidnaps Alina to his castle, where he wants to win her heart. But the young warrior Lucian (Ben Robson), together with Alina's little sister Esme (Holl Earl) and the vampire hunter Van Helsing (Jon Voight), wants to prevent this at all costs...

The Singapore-born filmmaker Pearry Reginald Teo is trying to take on a new side with "Dracula - Prince of Darkness", the most classic of all vampire myths. He mixes the well-known story with elements from "The Beauty and the Beast", fantastic adventure series like "Xena" and "Hercules" and then spices it up with a little pinch of the currently so popular "Twilight" vampire romance. Filmed at atmospheric locations in Romania, this Dracula reincarnation would have had potential for an entertaining horror-adventure-fantasy mix. But the film lacks not only the necessary budget, but also the quality of the script.

The low budget means that the effects sometimes look ridiculously cheap and that even make-up and costumes can only convince to a limited extent. But a good script with the right mixture of tension and humor could have made up for that. Instead, the book is not stingy with thin dialogues and a somewhat confused story. The film tries to compensate for this by using naked skin, which doesn't really work.

But the biggest mistake Teo made is his attempt to make Dracula a kind of romantic hero. With his flowing blonde hair he seems neither particularly threatening nor somehow attractive, but unfortunately only extremely silly. And also the recently awarded Golden Globe old star Jon Voight can hardly reveal anything like an acting quality under his not very flattering make-up as Van Helsing.

Admittedly, there are some moments in "Dracula - Prince of Darkness" that can definitely be called successful. The beginning, presented with some animation sequences, shows potential and also in between the visual conversion leaves a really good impression every now and then. And then there's the one or the other scene in which this bloodsucker-marriage even starts to be fun. Unfortunately, however, the less successful aspects predominate overall. With a little more budget, a better script and a more charismatic, menacing lead actor, the authors' intentions could have turned into a truly entertaining vampire adventure. But it's only enough for a poor B-movie, which can only be recommended to hardcore fans of romantically colored bloodsucking adventures.

Picture + sound: It is always clear to the film that the budget available to the makers was relatively small. Thus, no masterpiece should be expected from the audiovisual implementation. Image sharpness or colouring are at a good level and image disturbances or dirt cannot be detected. Nevertheless, there would still have been plenty of room for improvement in all areas. The same also applies to the sound, which has some decent, but just not stunning surround moments to offer. Good!

Extras: Apart from the trailer for the film, the DVD unfortunately has no bonus material to offer.

Conclusion: "Dracula - Prince of Darkness" seems a bit like the makers had tried to win new sides for the classic vampire legend with set pieces from "Beauty and the Beast", "Xena" and "Twilight". But the result is unfortunately only very well done to a limited extent, as neither the wooden play of the actors, nor the script or the effects are really convincing. Even a little naked skin and some successful ideas do not help to free the end result from mediocrity. If you can't get enough of romantically colored bloodsucking adventures, you can at least take a look