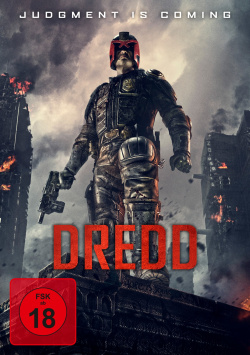 Film: After the British comic character "Judge Dredd" by author John Wagner and draughtsman Carlos Ezquerra was brought to life in 1995 with Sylvester Stallone on the big screen, but disappointed both fans and critics to a large extent, in 2012 director Pete Travis again dared to adapt the gloomy vision of the future. In "Dredd" Karl Urban ("Lord of the Rings", "Star Trek") puts on the uniform of the Jew in order to ensure law and order in the metropolis Mega City One. Not an easy undertaking, but criminal gangs, such as the cartel of drug baron Ma-Ma (Lena Headey, "Game of Thrones"), control large parts of the city. Al his new drug, which lets its users experience reality in extreme slow motion, makes the slum over which Ma-Ma rules insecure, Dredd is supposed to take up the fight against the drug baroness together with the new recruit, the telepathically inclined Cassandra Anderson (Oliver Thirlby). But as soon as Dredd and Anderson have entered the block of flats where Ma-Ma resides, it is hermetically sealed off and a merciless war begins in which the number of victims seems to increase every second. There's no escape to think of. But Judge Dredd will do everything in his power to do justice to his task as judge and executor even in this bloody chaos...

"Dredd" obviously tries to avoid the mistakes of the Stallone filming and to stick more closely to the comic template. The fact that Dredd doesn't take off his helmet, that figures like Cassandra Anderson have been adopted or the look of Mega City One are all aspects with which this interpretation wants to win the favour of the fans. The problem, however, is that the good aspects of the production are built into an extremely weak story. Finally, the story ends with the locking down of the block of flats, because from then on "Dredd" is a single long gun battle. Dredd and Anderson have to fight their way up floor by floor until they finally reach the heart of the complex, Ma-Mas headquarters. This strongly reminds of the Indonesian action surprise "The Raid". This one undoubtedly had the better fighting choreography and more effective moments of tension to offer, but with time it still seemed quite tiring. In the case of "Dredd", this state occurs after about half of its running time.

Admittedly, there are some very excellent action and combat sequences. The monstrous skyscraper, the trist-futuristic look and a wonderfully over-twisted, evil Lena Headey, supported by a handful of amusing one-liners, ensure that the rather boring brutality is broken up in an entertaining way again and again. Also, the fact that the film is absolutely consistent not only in its depiction of violence, but also in its turning away from the rather epic narrative structure of the first adaptation, has to be kept for the benefit of the makers in any case.

Although Pete Travis and his team have really made excellent use of the very small budget available to them, nothing changes the fact that "Dredd" rarely manages to really captivate, surprise or visually impress. Some good ideas, like the extreme slow-motion sequences, are overused too much and other aspects, like the city outside the block of flats, are given too little time for there to be some nice show values here. Thus, the comic adaption has a good entertainment value and should be able to convince better than Stallone's version. But even this attempt to awaken Judge Dredd to the life of a screen didn't become the big hit. There's only one in the end for that: Worth seeing with some cutbacks!

Picture + sound: Although the film is actually designed for 3D evaluation, the 2D version is also visually convincing. Some details are even more effective in the dark sequences because they are not swallowed by the additional darkening that 3D unfortunately often brings with it. In general, it's noticeable that the good contrasts and the harmonious black values make sure that the sharpness of the pictures doesn't have to suffer any real quality losses even in the mostly gloomy scenes. The colouring is rather discreet, only the CGI blood is sprayed again and again in powerful red.

The sound is in a powerful Dolby Digital 5.1 mix, which lets the sparse dialogues sound powerfully out of the speakers. The numerous surround effects provide for a very lively sound carpet, which makes the home cinema crackle again and again. Good.

Extras: The bonus material reads more extensively than it actually is. The six featurettes, for example, which deal with the comic template and the 3D effects, allow the viewer to take a look behind the scenes for just 14 minutes. And also the nine interviews with actors and makers (approx. 25 min.) don't offer more than typical promo superficialities. The trailer for the film and further program tips of the offerer complete the additional offer then also already.

Fazit: "Dredd" avoids many of the mistakes that were made in the first film adaptation with Sylvester Stallone over 15 years ago in the adaptation of the popular comic strip template by author John Wagner and cartoonist Carlos Ezquerra. But the SciFi action thriller is really well done only in a few moments. Long-lasting tiring fighting sequences, an exaggerated use of extreme slow-motion shots and a script that is not exactly bursting with originality noticeably reduce the entertainment value. Nevertheless, the movie is still enough fun in its own way and looks good enough to give genre fans an entertaining and enjoyable DVD evening. And for that there is then, despite the clear weaknesses, a deserved one: Recommendable!