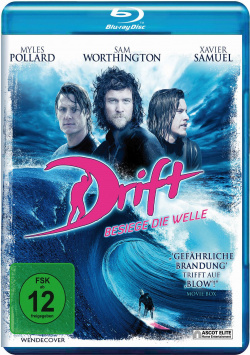 Film: After she has left her husband in a night and fog action, Kat Kelly (Robyn Malcolm) moves with her two sons Andy and Jimmy from Sidney to the west coast of Australia. There the two boys quickly discover their love for surfing. Years later Jimmy (Xavier Samuel) has just become one of the most talented surfers in the region. Andy (Myles Pollard), on the other hand, has hardly any time left for surfing, as he has to work hard to keep the family afloat financially. When the brothers meet the surf photographer JB (Sam Wortington), who leads a relaxed nomadic life in his colourful bus, Andy is extremely fascinated by his attitude to life. Although he gets the prospect of a promotion, he decides to quit his job and open a trade in surfing equipment together with his brother and mother. Not only does he want to sell outstanding boards and first-class suits, he also wants to provide his customers with a very special lifestyle. The good quality of the Kelly brothers' work quickly gets around and their brand could become a real success. But they simply do not receive any credit for the necessary seed capital. To top it all off, her buddy and collaborator Gus (Aaron Glenane) also gets involved with the local gangster Miller (Steve Bastoni), whose drug dealings could also be a disaster for the Kelly brothers' business...

"Drift - Defeat the Wave" is based on true stories about the origins of the surf industry in the early 1970s. With a very small budget, the directors Morgan O'Neill, who was responsible for the scenes determined by the dramaturgy, and Ben Nott, who staged the surf sequences, staged a very atmospheric surfer drama that scores with good actors and an engaging visual implementation. Especially when the Kelly brothers get on their surfboards and defy the huge waves on the Australian west coast, the triple award-winning work at the Independent Film Festival in Rome has a very high show value.

The mixing of drama with a little dry humor also works very well, which is also due to the relaxed play of supporting actor Sam Worthington ("Avatar"). On the other hand, what the movie has to suffer from is that the makers have overloaded the story with too many subplots. If these individual plot strands were all well elaborated and captivatingly staged, that wouldn't necessarily be a problem. But some of them remain superficial and dominated by clichés, so they tend to damage the positive overall impression rather than reinforce it. Of course the two brothers have to fall in love with the attractive Hawaiian Lani (Lesley-Ann Brandt) and of course there is a quarrel between the brothers. This is just as predictable as the problems Andy gets into with the mean Miller or what happens at the big surf contest at the end of the movie. The craftsmanship and acting are all very well implemented. But it's just too much of a good thing. A little more dramaturgical depth with less strands would have certainly done "drift" good.

Surf enthusiasts will perhaps also be disturbed by the fact that there are relatively few surf sequences to be seen in the almost two hours running time. But despite these criticisms the overall impression at the end is very positive, which is achieved by the relaxed atmosphere, the beautiful recordings of the Australian west coast, the good actors and the harmonious soundtrack. Certainly "Drift - Defeat the Wave" will not be a classic of the surfer film. But the Australian cinema hit is definitely worth seeing - and not only for passionate surfers!

Picture + sound: The highlight of the film, the great surf sequences, present themselves at the Blu-Ray in great quality. The colours are very powerful, in the clear blue of the sea you can really lose yourself. The sharpness of detail is on a very high level overall, and the balance of contrasts and black levels is also convincing. The DTS-HD Master Audio 5.1 Mix presents not only ambient noise and sound effects, but also the dialogues on the surround channels. If you don't watch the film via a surround system, you will notice that the dialogues sound a bit quieter than the rest if they don't take place directly in front of the camera. But if you have the appropriate surround channels, you will get a lot of movement in the tonal events. Good!

Extras: In addition to the trailer for the film, a short visit to the Australian premiere of the film (approx. 6 min.) and an uncommented look at the shooting (approx. 20 min.), Blu-Ray exclusively has some detailed interviews with the directors and actors (a total of approx. 94 min.) to offer. A short promo of the label Quicksilver (approx. 26 sec.) and program tips of the provider round off the additional offer.

Fazit: "Drift - Defeat the Wave" is a great filmed surf drama, which can shine with some great shots, but dramaturgically only offers good mediocrity. The two directors have inflated the story with too many subplots, which makes the movie as a whole seem a bit superficial. Nevertheless: the beautiful pictures, which perfectly come into their own on the technically well realized Blu-Ray, and the good actors make the movie despite its dramaturgical weaknesses not only, but especially for surf lovers absolutely worth seeing.