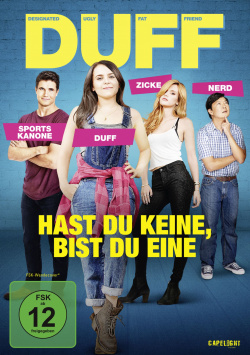 Film: Actually Bianca (Mae Whitman) is quite happy with her life. Well, she doesn't like being the most popular girl at her school. But with Jess (Skyler Samuels) and Casey (Bianca Santos) she has two best friends with whom she has been going through thick and thin for years. And the girl swarm Wesley (Robbie Amell) is a close friend since the sandbox. The eternal teasing of school bitch Madison (Bella Thorne) can also be endured there. But then she learns what a DUFF (Designatet Ugly Fat Friend) is and has to fear that in her clique she takes on exactly this role of the unattractive appendage, which is only used by boys to get to Jess and Casey. And suddenly the once so unbreakable friendship between the girls breaks up and Bianca wants to do everything she can to stop being a DUFF. Wesley, of all people, is supposed to help her with this, and he's willing to do it for a few extra lessons. But his ex Madison doesn't like that at all and she makes it her only task to sabotage Bianca wherever possible. A DUFF must not steal her show…

"DUFF - If you don't have one, you are one" sounds like a typical teen high school comedy. And in principle, that's exactly what it is. But it happens every few years that there are movies in this not very profound genre that are pleasantly cheeky, clever and charming and thus stand out from the crowd. That was with "Clueless" as well as with "Girls Club" or "Easy to Have". The directorial debut of Ari Sandel, based on the novel "Von wegen Liebe" by Kody Keplinger, is clearly one of those positive genre surprises, which is reflected in the good actors, some really amusing jokes and well-written dialogues.

Alone the scene in which Bianca and her two best friends quarrel is beautifully written. Where you used to just throw insults at each other on the head before you got mad at them, you now have to get unfriended on Facebook, follow the Twitter feed, delete the Instagram photos and so on. The unsightly problem of cyberbullying is also treated in a pleasantly ironic way, without the victims being ridiculed. Sandel and screenwriter Josh A. Cagan almost always find the right tone to address the permanent presence of social media in the lives of most young people without simply demonizing it. This gives the impression that they understand and take seriously the characters of their film and their problems and thus also those of the target group, but then they deal with them in a correspondingly biting and ironic way.

The young ensemble, led by the former children's actress Mae Whitman ("Independence Day", "Parenthood"), who perfectly embodies the mixture of inconspicuous DUFF and self-confident young woman, can also convince. But also Disney star Bella Thorne as an ice-cold bitch or Allison Janney as Bianca's not quite conventional mother can convince all along the line. Certainly, "DUFF - If you don't have one, you are" is neither particularly challenging, nor does comedy reinvent the genre of teen comedy. However, a good script, a casual direction and the well-placed actors make a rather conventional story into a very charming, casual fun, which you can get to like even when you're no longer part of the YouTube and Instagram generation. An excellent proof that teen comedies don't automatically have to be flat and stupid and sometimes are much better than their reputation. The following applies quite clearly: Absolutely worth seeing!

Picture + Sound: The picture and sound quality of the DVD corresponds exactly to what can be expected from a current cinema production. The picture is absolutely clean, the colour scheme is harmonious and the contrasts are also on a good level. The Dolby Digital 5.1 Mix sound, as usual for the comedy genre, doesn't ignite a big surround firework. Dialogues and music are more in the foreground. But there is also always audible movement in the multi-channel range, which can create an overall very positive impression. Good!

Fazit: "DUFF - Hast du keine, bist du ein!" is a charming and amusing example that teen comedies don't automatically have to be flat and stupid and sometimes are much better than their reputation. A clever script, charming actors and a nice story make this comedy absolutely worth seeing not only for the young target group. The audiovisual implementation of the DVD is on a good level and leaves nothing to be desired. The bonus material is quite promolastic, but fans of the movie can still take a look at it. The bottom line for the DVD is very clear: Absolutely recommendable!