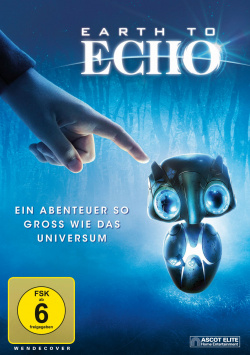 Film: Alex (Teo Halm), Tuck (Brian "Astro" Bradley) and Munch (Reese C. Hartwig) are best buddies and simply inseparable. But their friendship is facing a difficult test. Since their idyllic housing estate is to give way to a new highway, the three boys face a move into an uncertain future. They will no longer be able to see each other every day and will no longer go to the same school. It's a real catastrophe that can't be stopped. But then something unusual happens that makes the friends forget their worries: on their mobile phones they receive cryptic messages that they cannot decipher. No help is to be expected from their parents, so the boys set about finding out the secret themselves. The search leads her to a strange object that at first looks like a stone. But when they find out what this strange thing is all about, they are already deep in an exciting, but also dangerous adventure that will change everything...

"Earth to Echo" tells a really nice story that was obviously inspired by classics like "E.T.", "Stand by me" or the "Goonies". Sometimes the parallels to "E.T." are so obvious that it's impossible not to compare the two movies with each other. And that's where Earth to Echo doesn't come off too well. Actually, it's not a bad thing that director Dave Green tried to adapt his story to the tastes and habits of the young generation. But the decision for the "Found Footage" look was not a good choice for several reasons. On the one hand, the style is not consistently applied. Thus, whenever the little alien robot is used, the action takes on more classic feature film forms with typical film music and a somewhat calmer camera. Otherwise, however, the mobile video look dominates.

And it ensures that the film loses exactly the charm that has turned its obvious role models into timeless classics. J.J. Abrams recently proved with "Super 8" that you can tell a fantastic story about friendship, growing up and aliens with classic charm and modern effects. But "Earth to Echo" is a long way from that. Just the fact that the children, even when they experience incredible things, immediately point the camera at themselves to say any useless comments to potential YouTube users robs the story of its real magic.

Sure, young viewers won't really mind. You won't be able to remember the film for a few weeks, and you won't even be able to honour it in twenty years as a beautiful childhood memory. But as an entertaining adventure pleasure for the side, Green's staging may be enough, especially as the child actors can fully convince. It's just a pity that the desperate ingratiation with the YouTube generation has robbed a potentially really beautiful story of so much potential. All in all: no real failure, but "Earth to Echo" doesn't have what it takes to become an imaginative youth movie classic. For an entertaining DVD afternoon, the shaky children's adventure offers enough entertainment. And there's just one more thing for that: Worth seeing!

Picture + sound: There is nothing to complain about about the technical implementation. The picture of the DVD is very clean and pleasantly sharp despite some fast camera pans and blurred moments. The colouring is very authentic and the contrasts are also mixed harmoniously. The sound is available as a lively Dolby Digital 5.1 mix, which provides powerful utilization of the surround channels especially in the last third with some good sound effects. Good!

Fazit: "Earth to Echo" seems a bit like the YouTube version of "E.T.", crossed with a pinch of "Super 8". The ingratiation with the young mobile phone video generation costs the film much of the potential charm of the actually beautiful story. For short-term entertainment for a rather young audience this may be enough. But "Earth to Echo" definitely doesn't have what it takes to become a classic youth film in the style of its great role models. The DVD presents the film in good picture and sound quality and also the bonus material is completely in order. This is just enough for one: Recommendable!