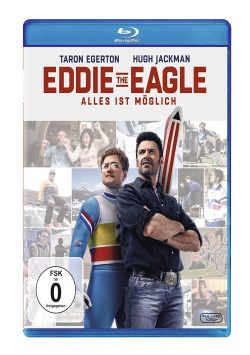 Eddie the Eagle - Everything is possible - Blu-ray

Film: Even as a little boy Michael "Eddie" Edwards (Taron Egerton) had dreamed of taking part in the Olympic Games. But unfortunately, it is not necessarily what one would generally call a sports cannon. After trying unsuccessfully in various disciplines, he decides to go skiing. But despite his best efforts he did not make it into the British team in the qualification for the 1984 Winter Olympics. But Eddie doesn't give up. As a ski jumper he finally wants to fulfill his dream. But since he is always getting obstacles in his way and only he seems to believe in himself, he urgently needs support. In the ex-pro Bronson Peary (Hugh Jackman) he finds the perfect coach. But are a few good tips and a big dream enough to compete with the best ski jumpers in the world?

"Eddie the Eagle" is based on the true story of the Brit Michael "Eddie" Edwards, who wasn't a very good ski jumper and never even came close to a medal, but who could at least jump into the hearts of the spectators, the international press during his participation at the Olympic Winter Games 1988. Director Dexter Fletcher ("Make my Heart fly - Verliebt in Edinburgh") has not only recognized excellently that the path from underdog to darling of the audience is the perfect material for wonderful feel-good cinema, but has also implemented it in a first-class way. His film is not only a tribute to the inspiring ski jumper, but also a charming declaration of love to the cinema of the 80s.

Fletcher has, of course, taken some liberties for his interpretation of the true events. For example, the figure of Bronson Peary is completely invented. But the grumpy ex-pro, wonderfully played by Hugh Jackman, is an important element for the film's success. For it is only through the interaction between Eddie, who is bursting with naïve joie de vivre, and the cynical Bronson that the film receives the spark that turns a nice biopic into a wonderful comedy, for which the word "heartwarming" seems to have been invented.

Taron Egerton, who in "Kingsman: The Secret Service" perfectly transformed the prolific street boy into an elegant super agent, is hardly recognizable with thick glasses and a slightly protruding lower jaw. But even if at the beginning you still have the feeling that his portrayal of "Eddie the Eagle" could easily degenerate into a caricature, at the end he makes the unorthodox hero so incredibly likeable that even a younger viewer can understand why the fans lay at the feet of the British at that time. The unshakeable belief in himself and his disarming down-to-earthness made him a folk hero for a short time. The effect that the real Michael "Eddie" Edwards had on people is perfectly reflected in Egerton's game.

Supported by some very good supporting actors, including Iris Berben, accompanied by a wonderful 80's synth soundtrack and filled with a life-affirming feel-good atmosphere, "Eddie the Eagle" flies into the hearts of the audience even in its semi-fictional screen version. Not a profound athlete drama, but simply a wonderful comedy to keep smiling and relaxing. And this is exactly what gives him the rating: Absolutely worth seeing!

Picture + sound: The technical implementation of Blu-Ray is at a very high level. The image sharpness is very good and allows even small details and textures to come to the fore. The colour scheme looks very natural and the balance of black levels and contrasts also support the positive overall impression of the image quality. The same can be said for the sound. Although there is no big firework of effects due to the genre, the surround channels are still used by atmospheric ambient noises and the ingenious 80s soundtrack, which results in an overall very harmonious sound carpet. Very good.

Extras: In addition to the trailer and a picture gallery, the Blu-ray also has a rideable, worth seeing Making of (approx. 46:43 min.) to offer. Not a lot, but good!

Fazit: "Eddie the Eagle" flies into the hearts of the audience, accompanied by a wonderful 80s synth soundtrack and filled with a life-affirming feel-good atmosphere, even in his semi-fictional screen version. The Blu-ray convinces with a good picture and sound quality as well as a worth seeing making of. If you just want to see a really good mood movie, don't miss this disc.