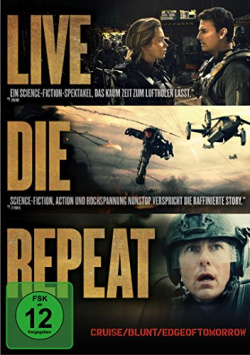 Film: In the not-too-distant future, aliens called "mimics" have attacked the Earth and threatened to wipe out all life on the planet. So far, almost every fight against the alien enemy has been unsuccessful. But now a surprise attack could bring about the decisive turn in the hopeless war. It is precisely in this fight that Major William Cage (Tom Cruise), an image strategist of the military who has never served at the front before, is supposed to do his weaponry for the first time. Although he tries everything to avoid this suicide squad, he soon finds himself in the middle of a brutal battle and has to realize that he and the other soldiers have fallen into a deadly trap of the Mimics. And after only a few minutes Cage is killed - only to wake up the day before the mission. Trapped in a time loop he has to experience this terrible battle again and again. He meets the tough fighter Rita Vrataski (Emily Blunt) from the Special Forces, who has experienced the same time loop phenomenon before. She sees in Cage the chance to finally destroy the Mimics. And so she begins to train the inexperienced soldier for this decisive mission - not knowing what deadly aces the alien enemy still has up his sleeve...

"Edge of Tomorrow" is based on the Japanese trivial novel "All You Need Is Kill" by Hiroshi Sakurazaka. The time loop theme of course immediately brings back memories of "And daily greets the groundhog". But director Doug Liman ("The Bourne Identity") has so cleverly and entertainingly varied the well-known and often used basic idea that the recognition value is almost completely pushed into the background by the entertainment factor. The whole thing not only benefits from its great special effects. Also, the fact that the movie doesn't take itself that seriously is very positive. Again and again Liman loosens up the action with humor, which at times is refreshingly macabre. The good laughs that are achieved are a good counterbalance to the dystopian mood of the story.

However, even if it's always a lot of fun to get down to it, the tension does not come too short. The numerous action sequences and dramaturgically more serious moments make sure that despite several scene repetitions it doesn't get boring for a second and that the viewer is captivated and entertained until the very end. Of course, the story of a logical questioning does not last long. And of course you could complain about some too clichéd dialogues and the too conventional ending. But since all possible points of criticism only marginally diminish the pleasure of this SciFi cracker, every critical frown quickly gives way to a contented smile.

Also there is nothing really negative to say about the actors. This is especially true of Tom Cruise. Even though he polarizes as a human being, he once again shows that as an actor he is really top. Cruise masters the transformation from an anxious, slick wimp to a tough action hero with a good portion of self-irony, which in the right moments gives way to a more serious performance. Whether you like Tom Cruise or not, it would be a lie to say that he plays badly or one-dimensionally here. With Emily Blunt he has a great colleague at his side, who looks surprisingly good as a seemingly unscrupulous fighter. And even the smaller supporting roles are excellently cast with Bill Paxton or Brendan Gleeson.

Sure, "Edge of Tomorrow" is not a highly intellectual head cinema, not a socially critical future vision for festival juries, but a popcorn cinema suitable for audiences. But Doug Liman also offers a thrilling story, a pinch of subversive humor and really good actors, in addition to high show values and fast-paced action. And it's exactly this mixture that sets the film apart from the masses of other blockbusters and makes this futuristic groundhog day "absolutely worth seeing"!

image + sound: The picture on the DVD is absolutely clean and pleases with its atmospheric, somewhat dirty look. The image sharpness is good, but the Blu-ray still leaves some room for improvement when it comes to quality. All in all, the visual implementation leaves an equally positive overall impression, as does the lively Dolby Digital 5.1 mix, which scores particularly well in the numerous action sequences with some great surround moments and decent bass. Good!

Extras: As is unfortunately almost the rule in the meantime, the DVD is much worse on bonus material than the Blu-ray. While the Blu-ray offers an extensive bonus package, the buyers of the DVD have to deal with two short but worth seeing featurettes about the "weapons of the future" (ca. 8:04 min.).) and the "creatures from another world" (approx. 5:24 min.).

Fazit: "Edge of Tomorrow" is exciting, original, amusing and well played. Great effects and a good portion of self-irony make this otherwise rather gloomy vision of the future one of the big action highlights of the cinema year 2014. The DVD presents the film in good picture and sound quality, only the bonus material is a bit meager. If you want more here, all you can do is pick up the Blu-ray. Otherwise, however, also applies to the DVD: Absolutely recommended!