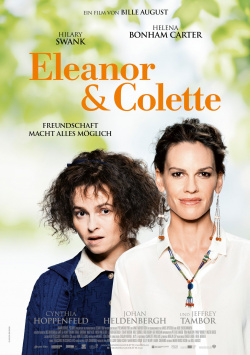 Eleanor Rise (Helena Bonham Carter) suffers from paranoid schizophrenia. She knows that she needs help from doctors, that she could only lead a normal life with medication. But the psychiatric clinic seems to be all about sedating her. Eleanor sees the only way to get a say in medication as being in the court. The committed lawyer Colette Hughes (Hilary Swank) is supposed to help her. But although Colette gives her all, she seems to be powerless against the overpowering pharmaceutical industry. It's almost a miracle she makes it to the Supreme Court with this case. But that doesn't mean the fight has been won…

The Danish director Bille August ("The Ghost House", "Night Train to Lisbon") tells in his latest drama "Eleanor & Colette" a really fascinating, because true story. Strictly speaking, the film is actually a typical court drama, the usual fight between David and Goliath, as it has been seen so often. What makes this story so special, however, is the unusual friendship between two very different women, which develops in the course of the fight against the injustices in the health system. The film doesn't only offer a dramaturgically interesting level, on which you as a spectator can watch as Eleanor Rise succeeds in forcing an overpowering opponent to his knees with the help of her lawyer. It also creates an emotional level that provides some very moving moments.

No question: The story is interesting, stirring and stirring. Undoubtedly, the whole thing is also played excellently by Helena Bonham Carter, but also by Hilary Swank and Jeffrey Tambor. Nevertheless, there is another BUT: The production looks very much like a "television film of the week". This is particularly noticeable in the visual language, which was Bille August's great strength in many other works. Somehow the film seems to be out of place on the screen, as if it had actually been conceived for the screen. That doesn't necessarily make him a bad movie. There isn't really much to criticize about the film. But at the same time there is also no real reason why you have to watch it in the cinema.

Whoever likes gripping court films and dramas based on true stories will not regret buying cinema tickets because of the two strong main actresses. But those who expect more than good entertainment at TV level might be disappointed by the somewhat conventional staging. This leads to the following judgement: Worth seeing - but only with restrictions.